All the news about the clubs taking part in the Ligue Féminine de Basketball for the current season will be communicated via this page.

Since your web browser does not support JavaScript,here is a non-JavaScript version of the image slideshow:

This page is updated frequently and you will be able to keep track by subscribing to our site update page "WBBiF blog - What's New" with our RSS Feed.

If you are not familiar with the RSS Feed just click on this link for instructions: What is a RSS Feed?

This page is now the archive link for the 2010-2011 season and will not be updated again - Please check the links on the right hand margin for the current season news.

You can move to any section by clicking on the link below or by scrolling down the page.

* Nantes-Rezé had a point deducted due to exceeding imposed salary cap in February.

01 May 2011: Bourges Basket too strong for Tarbes in game one

09 May 2011: Nantes-Rezé retain challenge round trophy

27 April 2011: Challenge round semi-final game one - Arras and Mondeville win at home

19 March 2011: Round 21: Bourges Basket get closer to the regular season title

22 January 2011: Round 15: Victories for Bourges, Basket Landes, Montpellier and Tarbes

08 January 2011: Has the domestic blues gone for Villeneuve d'Ascq?

19 December 2010: Snow does not stop Bourges and Tarbes from travelling

04 December 2010: A victory at last for Pelagia Papamichail and COB Calais

27 November 2010: Basket Landes end drought while COB Calais are still without a victory

13 November 2010: Who in the LFB can stop Bourges and Tarbes

24 October 2010: A good weekend for teams playing at home 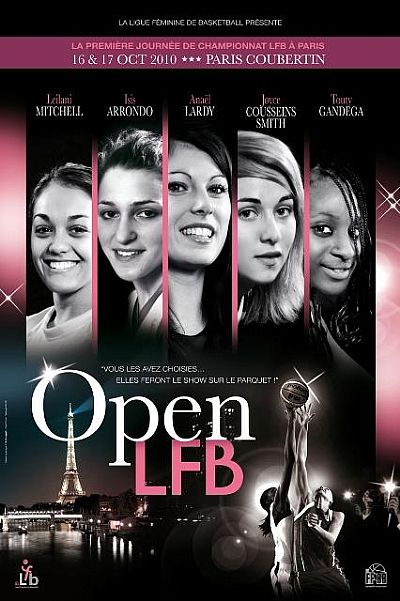 13 October 2010: Everything is set for Basket and the City six

20 November 2010: Nantes-Rezé's victory against Basket Landes was not pretty

13 November 2010: Tarbes had it easy in Villeneuve d'Ascq

31 October 2010: A road win for Nantes-Rezé against Villeneuve d'Ascq

30 October 2010: Union Hainaut Basket get first win of the season

21 May 2011: Valérie Garnier will lead a new look Bourges Basket

05 January 2011: Brooke Smith comes in for Vaida Sipaviciute at Tarbes

27 November 2010: The players merry-go-round in the medical cycle

15 October 2010: Arras LFB roster has not changed much

18 May 2010: Bourges Basket signs Maja Miljkovic and Cathy Joens for next season

Links to the Open LFB

The opening day of the LFB regular season