Union Hainaut Basket came out on top of Challes-les-Eaux (60-52) in a roller coaster game with plenty of high and low points. 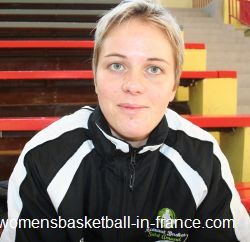 Emilie Duvivier, a former Challes-les-Eaux player, had the hot hand during the first ten minutes with three triples for the hosts.

However Challes-les Eaux had more offensive options and edged the first quarter (16-15).

The outcome of the game was decided during the last five minutes of the second quarter when UHB turned a tied game (23-23) into a 7-point advantage at the interval (31-24).

Challes-les-Eaux were unable to get the lead back despite reducing the deficit to a single point during the third quarter allowing UHB coach Corinne Bénintendi to celebrate the victory (62-50).

Duvivier finished with 13 points and 6 assists while Jasmon Covington top scored with 19 points.

Aix-en-Provence, playing at home against Basket Landes, went into the final quarter trailing by 10 points and yet with 2:26 left to play they were level (73-73).

The joy was short lived because player of the match Humphrey, served by Tamera Young, hit the game winning shot for Basket Landes (81-80).

Humphrey finished with a game high 31 points. The other Australian playing for Aix-en-Provence Natalie Hurst finished with 21 points, 6 assists and 10 drawn fouls. 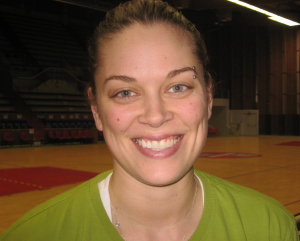 Kristen Mann (left) fired in 31 points for Charleville-Mézières in their victory against Villeneuve d'Ascq (63-58).

Olayinka Sanni was once again the main player for Villeneuve d'Ascq with 24 points, 11 rebounds and 5 steals. But she also had 7 turnovers.

Villeneuve went into the final quarter leading (52-49) but then missed their first 7 attempts allowing their hosts to regain the advantage (53-52).

6 points by Bridgette Mitchell put Villeneuve back in front (58-55) with four minutes to play. However they were unable to score again as their festival of turnovers and misses continued.

For Charleville Ekaterina Dimitrova put her side in front for good before Mann finished the scoring for their fourth victory in the LFB.

Look back at the LFB basketball news from round 8.

Bourges Basket are the big winners of the ninth round of games with Lattes Montpellier and Tarbes both losing.

Cathy Joens scored 18 points for Bourges Basket in the victory against Nantes-Rezé (73-69).

Arras' domestic season is back on track after a home victory against Tarbes (73-59). Leilani Mitchell (right) was unstoppable with a game high 28 points. She also picked up 6 rebounds, 6 assists and 5 steals.

In the other game on Sunday, Mondeville made up a final-quarter 6-point deficit to beat Lattes-Montpellier (67-64).

K. B. Sharp led the Mondeville attack with 17 points and 5 assists while Yacine Séné contributed 16 points.

LFB round 9 results and points scored: