Bénintendi speaks in French and starts with an explanation of how she came to be coach of UHB-SA.

She explains that the history of her departure from Challes-les-Eaux is well known and that she continued with her other job as councillor.

Later in the summer she was contacted by Jean-Pierre Boulanger, the president UHB-SA. After discussions with him she felt comfortable to accept the job although she knew that she was not his first choice.

Her decision to accept was based on her feeling and the history of women playing basketball at the top level in the region.

Another attraction was the opportunity to rebuild and try and take the club back to its former place in the elite.

In terms of basketball she has nothing to complain about because the conditions are perfect for her as well as the players.

The environment and facilities are the same as in clubs of the Ligue Féminine de Basketball (LFB).

They train twice a day and they have eight players on professional contracts. On top of that the president is allowing her a free hand to run the team in her own manner.

She did not have the same freedom while she was at Challes-les-Eaux. 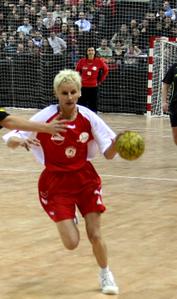 The objective is to take the club out of NF1 and return to the LFB as quickly as possible, although under no pressure from the president as they have to try their best with the actual team roster.

After the freedom with recruiting in the LFB, the rules in NF1 are challenging because because you are only allowed to play five new players in one match.

Another challenge is the style of basketball played in NF1, it is more physical and less tactical than in the LFB.

In the LFB the players know what they are supposed to do and learn quickly while in NF1 the play makers or ball carriers play an important role as they must conduct the play.

For UHB-SA the most difficult aspect is that no matter who they play they are the team to beat because of the name of their club.

People have forgotten that the club has very little in common with the past glories of USVO and Saint Amand. Every match is tough and it is difficult for the players - they have to remain focused while remaining modest.

Against popular belief, they are not the strongest team in the league according to Bénintendi. She went to explain further and used Charleville-Mézières as an example of a team that is stronger and have a more solid game that makes them stronger that UHB.

As far as she is concerned there are clubs in the league that are stronger and better than them. Although she makes no excuse for this, she is new and has her style and the players are new so it should take time to get everything in place.

So the challenges at Union Hainaut are many. But who is who at the club: Jean-Pierre Boulanger is the president, and Corinne Bénintendi is the head coach.

Return to who is who index

who is who picture credits: