Webcast TV
The LFB channel for matches
on the internet 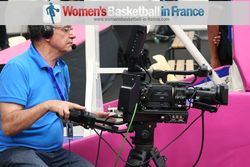 After two seasons of uncertainty, Webcast TV returned for the 2011-12 season of the Ligue Féminine de Basket (LFB).

LFB TV is a free channel for viewers from all over the world to watch a number of live games from the LFB in France.

Due to the fact that local TV channels in France may also broadcast games during the weekend, all LFB TV live games are played on Friday evening.

You find below the links giving you access on demand to archived games from the new service. Please note that the LFB determine how long games are available for.

Due to the fact that the LFB are providing a high definition channel free, we at womensbasketball-in-france.com are not providing links to all the presentations and documentaries.

However you can still view games from the previous seasons (2008-2010) by checking on the Webcast TV links on the right side of the page.

Starting from 2012-2013 we broadcast more live games from other webcast services providers on this page.

This includes games from the LFB, EuroLeague Women, EuroCup and other domestic leagues.

This page is updated frequently with the times of matches to be broadcast.

Only four games from the 2011-12 season's schedule are available for viewing: