Sarah Michel's performance may her win the LFB player-of-the-week award. She scored 22 points (8-of-11 shooting), pulled down 9 rebounds, collected 6 assists, made 3 steals while committing just 2 turnovers.

She also drew 5 fouls (this means she was fouled on) while committing none as Nantes-Rezé held off Basket Landes (68-63) in the opening game of round 16 of the Ligue Féminine de Basketball.

Her performance must have reminded her coach Emmanuel Coeuret of her matches between 2004-2007 when he was the director of the Mondeville youth academy. Michel was then playing for the USVO youth team and she was the most feared player outside the CFBB playing in the national championships. 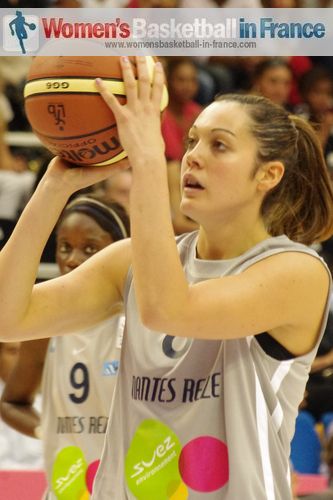 9 first-quarter points by Michel (in picture) kept Nantes in the game as they trailed (14-20). Leading Basket Landes offensively was Tamara Abalde with 6 points and the guard duo of Olivia Epoupa and Carmen Guzman with 5 points each.

Nantes-Rezé picked up during the second quarter and took advantage of a couple of missed shots to reduce their deficit (32-34) going into the interval.

While Michel continued her one-lady demolition act her team-mates Gunta Baško-Melnbārd and Marielle Amant stepped up offensively for their side to regain the lead (51-49) going into the final quarter.

Despite Anaïs Le Gluher-Cano and Sabrina Reghaïssia not having a good shooting day, Basket Landes trailed by just 3 points with 42 seconds to play.

Basket Landes had a couple of chances to level the score or even go in front but they threw the ball away.

Nantes-Rezé's margin of victory (68-63) also gives them the edge over Basket Landes over the two games if the teams finish tied on points at the end of the regular season.

You may watch the full game below: