Nantes-Rezé out to defend challenge round title

Nantes-Rezé got off to a perfect start with the first 5 points of the game and were leading (11-8) after five minutes.

Meanwhile Laurent Buffard started to rotate his bench and was rewarded by his players as they finished the first quarter ahead by 10 points (24-14).Caroline Aubert started to conduct the play at the start of the second quarter. She scored the first points to level the aggregate score (26-14).

Arras picked up their game with Adja Konteh (in picture) being the catalyst during a 7-0 run.

Nantes went back to their speciality with Allison Hightower, Mélanie Plust and Yuliya Andreyeva all connecting from the land of many to go 14 points clear (37-23) and take the aggregate lead.

Arras managed to stay in the match with scores from Leilani Mitchell and Konteh.

Both teams stepped up defensively during the last two minutes of the quarter with the only scoring coming from the free-throw line.

However Nantes-Rezé went into the locker room in front (43-28) for an overall advantage of 3 points.

The third quarter was more physical and the officials were often blowing their whistles for fouls. Lindsay Taylor was the major victim picking up 3 fouls in four minutes.

Nantes-Rezé's 17-point lead was slowly eroded and with 26 minutes played Akonga N’Simbo reduced it to 10 points with a shot from the land of many (51-41). 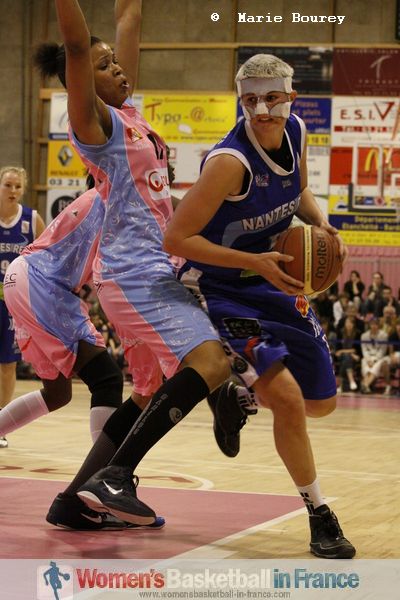 The last four minutes became rather scrappy with a lot of unforced turnovers. Arras slowed the game down as much as possible but were unable to stop Emilija Podrug (left) from scoring (55-43) with a minute to play in the quarter.

Podrug opened the scoring in the final quarter but Sarah Michel responded with a trey for Arras.

Yet Podrug continued her one-lady show with a couple more points from the charity stripes which restored the 13-point advantage (59-46) for Nantes.

Arras were struggling and Hightower swung the tie in favour of Nantes-Rezé with 5 points and an important steal.