The first basket of the Open LFB came from Lauren Neaves from Aix-en-Provence after 41 seconds of play. Neaves went on to score a total of 14 points during the first 10 minutes. 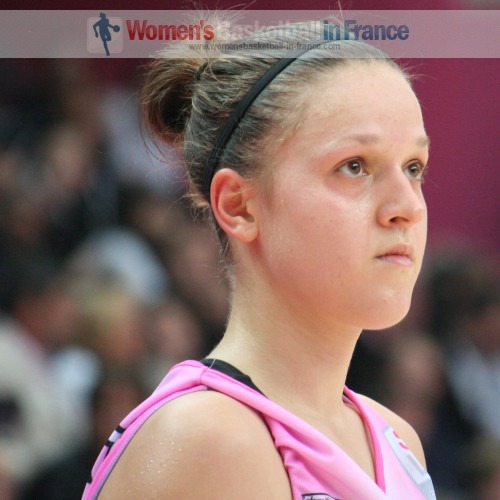 It was not an exciting first quarter with neither side really defending. Toulouse were able to stay in the game thanks to the individual exploits of Jessie de Colo and Camille Aubert (left) who scored most of their team's points.

However Aix, stronger in the paint and with the experience of Hollie Grima and Sabrina Réghaïssia, never allowed Toulouse to settle.

Grima brought the first quarter to an end with a rainbow trey from the top of the arc as Aix opened up the first gap of the match (28-20).

Aix appeared to have control of the game as they went 14 points clear (41-27) after only 14 minutes of play.

However de Colo was stealing the show with clutch shooting as Toulouse refused to let Aix run away with the game.

Treys by Claire Tomaszewski and Natalie Hurst once again put Aix back in control. Yet Aubert had the last say of the first quarter as she went coast to coast to lay up on the buzzer.

Toulouse fought for everything in the third quarter. They reduced their deficit to 2 points (55-57) with three minutes to play with Chandra Jones giving De Colo a hand in the scoring.

Toulouse went all out in the final quarter. With back to back three-pointers by Shanavia Dowdel and Jones brought their side back on level terms (70-70) with five minutes to play.

De Colo was on hand with a second-chance opportunity to put Toulouse in front with four minutes left to play.

The intensity went up and with 94 seconds remaining Hurst levelled the score on a fast break (76-76).

The last 90 seconds were end to end stuff with Toulouse having the chance to win the game on the buzzer. But the lay-up of Jones refused to drop and the game went into overtime.

Toulouse ran out of energy during overtime allowing Aix-en-Provence to walk away with the victory (86-80).