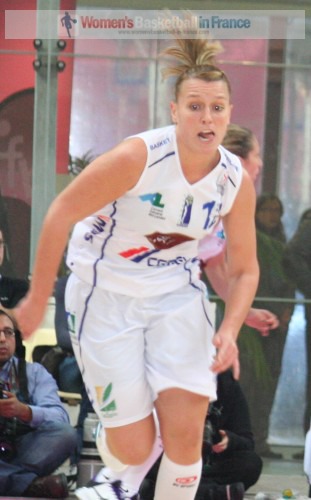 Marion Laborde (left) opened the scoring with the first shot of the game with less than 10 seconds played for Basket Landes.

Nantes-Rezé were on the score sheet 20 seconds later with 2 points from Latvian international Sabine Niedola.

The battle between Jennifer Humphrey and Jenna Smith, the pivots from both sides, was launched.

Smith won the first battle and scored 4 points for Nantes while Humphrey went scoreless. However Tamera Young scored 8 points for the guests from Landes and pulled down 5 rebounds.

Elsewhere Caroline Aubert was conducting the play for Nantes-Rezé and hit the only trey in the first 10 minutes as her team won the first quarter (19-14).

Laborde opened the scoring in the second quarter for Landes and pushed her team-mates as they started to chip away at the score.

Nantes-Rezé were struggling as Humphrey started to find her way to the basket. Yet they held on to the lead thanks to a trey by Joyce Cousseins-Smith (26-20) with 6:30 left to play in the quarter. 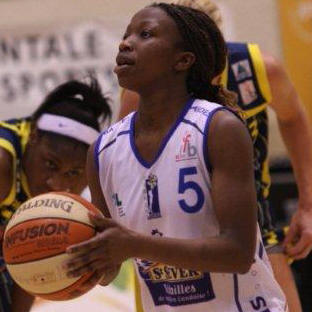 Aminata Konate's (right) pace was starting to cause Nantes problems while Humphrey and Young took control of their territory under the basket as they regained the advantage (29-28) 90 seconds before the break.

Despite a couple of points from Aubert, it was Basket Landes that went into the locker room ahead (33-30) after back to back scores from Young (12 during the first half) and Anaïs Le Gluher.

During the first five minutes of the third quarter there were only 6 points scored, 4-2 in favour in Nantes-Rezé.

Mame-Marie Sy-Diop drew fouls off Humphrey and Julie Barennes while also adding 5 more points for Nantes to regain the lead (39-35).

A trey by Laborde brought the guests back into the game. But a buzzer beater by Smith enabled Nantes to go into the final quarter leading (44-40).

Two treys by Allison Hightower and a three-pointer by Aubert enabled Nantes to open the first lead of any significance (53-44) with just under eight minutes left to play.

The three-point festival continued, this time from Basket Landes with Laborde hitting the target.

Nantes-Rezé switched to zone defense and also played the closing minutes with Aubert and Cousseins-Smith both on court.

The idea was to use their speed to neutralise the power of Humphrey in the paint, who was also looking very tired.

The tactics appeared to be working with Nantes maintaining the 9-point lead (59-50) with 2 points from Niedola with the game in money-time.

Still Basket Landes came storming back and with 35 seconds left to play Laborde connected with a shot from close to centre line (57-61).

Landes hit another shot from beyond the arc but Nantes secured the victory with 5-from-6 from the free-throw line (66-60).

Return to the index: LFB match for the current season