Tarbes weathered the storm to qualify for the LFB final

The first ten minutes were lively with both teams going perfect from the free-throw line.

Bass was provoking fouls but was not hitting her shots while Tarbes kept things simple in the paint to lead (18-17) by the end of the first quarter.

Florence Lepron found herself in foul trouble early in the second quarter and had to return to the bench for Tarbes.

Jelena Dubljevic, back from suspension, kept out of trouble during the first half.

Magali Lacroix and Bianca Thomas (in picture) went on the rampage for Challes as they opened up a 10-point lead late in the second quarter while Tarbes went on a missing festival.

However Tarbes regained their scoring touch before the interval. Thanks mainly to Roneeka Hodges they trailed by just 7 points going into the second half (34-41).

Then Bass continued to draw fouls and miss free throws while Tarbes made up their deficit.

The pendulum was beginning to swing in favour of Tarbes as they regained the lead by the end of the third quarter (55-52).

Challes-les-Eaux had the worst start possible to the final quarter with their coach Aldo Corno picking up a technical, which resulted in a 2-point play. This turned into a 6-0 run for Tarbes.

Lepron controlled the pace of the game for Tarbes the rest of the way while Hodges and Dubljevic kept on scoring.

Challes did bring down the deficit to 3 points but without Bass on fire and Romy Bär (not allowed to play), they did not have a rotation strong enough to overcome Tarbes. 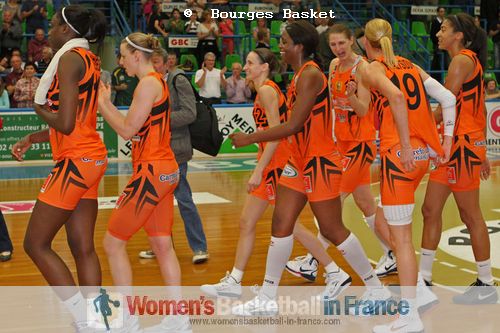 Bourges are hard to stop when on the back foot

The Bourges fans did not turn up in mass for this game and the arena lacked its usual atmosphere.

Bourges opened up with a (7-0) start. They appeared to blow Montpellier away leading (10-2) with less than four minutes played after a trey by Cathy Joens.

However Montpellier picked themselves up in a very physical phase to edge the first quarter (18-17) with 9 points coming from Ana Lelas.

The second quarter turned into a nightmare for Montpellier as they picked up 2 technical fouls and had 3 key players in foul problems.

Bourges took full advantage to take a 6-point lead into the locker room (32-26).

With Montpellier being handicapped they were unable to compete on equal terms with Bourges.

Paoline Salagnac (right) pushed her team-mates into action as they increased their advantage (51-37) going into the final quarter.

Yet Montpellier did give Bourges a little scare as they reduced the deficit to 5 points with six minutes to play.

However a trey by Joens put Bourges back on top for good.

The final minutes were a little rough and scrappy but Bourges, with a deeper rotation, did enough to qualify for their eighth consecutive LFB final.