Tarbes are one win away from another LFB championship final

Tarbes went on the attack from the tip-off with Brooke Smith (left) scoring on the very first attack. She then doubled the advantage a minute later with the second score of the game (4-0).

However Challes scored twice within 20 seconds but once again Smith scored to keep Tarbes in front (6-4).

Aldo Corno, the coach from Challes, was not happy with the officials and started to contest their calls to the displeasure of the home supporters who started to boo.

His strategy appeared to work as Mistie Bass started to throw her weight about and finished the first quarter with 10 of her team's 18 points.

Tarbes weathered the storm and with Hodges hitting her second trey managed to edge the first quarter (22-18).

Tarbes maintained an impressive shooting percentage all the way through the second quarter and led by as many as 9 points before setting with a (38-31) lead going to the locker room.

Tarbes did everything to make home advantage count. Alain Jardel was able to turn his bench more frequently.

Florence Lepron's passing was causing Challes problems while El Gargati (right) did not allow Bass any room to work her magic.

Hodges continued to find her way to the basket as Tarbes went into the final quarter ahead (60-46).

Tarbes stretched their lead to 20 points (66-46) with seven minutes left to play while Bass had a rest.

However Tarbes have a bad habit of letting big leads slip and Challes went on a 12-0 run. But with a minute to play Smith ended the fightback and then Hodges completed the scoring for Tarbes to win (72-60). 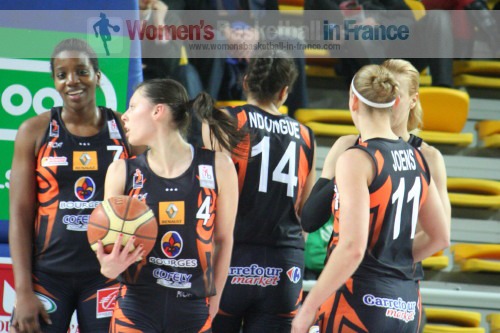 Bourges Basket scored the first 6 points of the game but failed to turn their early advantage into more points.

Montpellier slowly came into the game and went in front for the first time in the game with a Sandra Dijon-Gérardin trademark shot in the paint (14-13) after 8:30 with what turned out to be the last score of the first quarter.

Bourges went to work defensively in the second quarter, allowing Montpelier just 1 basket from open play and a couple of free throws.

Bourges scored 20 points and went into the locker room leading (38-20).

Pierre Vincent turned his bench regularly all through the second half of the match as his team cruised to victory with Paoline Salagnac leading the way with 15 points.