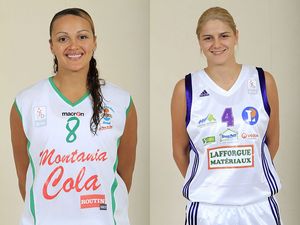 For the first meeting of the season in the LFB between Tarbes and Challes-les-Eaux, the supporters were given a demonstration by Mistie Bass (31 points, left in picture) and Jelena Dubljevic (26 points, right in picture).

The match was hotly contested with plenty of ups and downs with Tarbes hanging on to win in the end (75-68).

The first five minutes belonged to Challes-les-Eaux and Bass with 6 points (12-6).

Dubljevic and Ivanka Matic did all the early scoring for Tarbes. Yet they were unable to contain Bass, Magali Lacroix and Romy Bär and trailed (12-18) at the end of the first quarter.

Tarbes picked up in the second quarter. They went in front for the first time briefly (27-26) after 16 minutes.

Bass who was on a one-lady demolition job put Challes back in front. However it was the hosts who went into the locker room ahead (33-28) thanks to a buzzer beater by Erin Thorn.

Tarbes continued to press their guests during the third quarter and played some exciting basketball (alley-oop). They opened a 20-point lead going into the final quarter (62-42).

Challes-les-Eaux went back to work in the final quarter and scored the first 10 points of the quarter. With five minutes left to play they trailed by just 4 points (58-62).

Bass was doing practically all the scoring for Challes, while Dubljevic and Thorn were the big hitters for the hosts.

However once again Ana Cata-Chitiga with 4 points and crucial rebounds down the stretch made sure that Challes-les-Eaux got no closer.

Sunday basketball in the LFB favoured the home teams

Calais started the match quickly with Mano Sinico and Sylvie Gruszczynski getting on the scoreboard.

Calais continued to be aggressive and won the early duals to lead (10-4) midway through the first quarter.

Villeneuve started to win the battle in the paint and put points on the board. Thanks to a three-pointer by Ingrid Tanqueray they just trailed by 2 points by the end of the first quarter (16-18).

During the second quarter the teams cancelled each other out with Calais going into the locker room ahead (31-29).

During the third quarter Calais took advantage of the absence of Julie Page to finally take control of the game (49-42) going into the final quarter.

With this victory Calais are now one game behind Villeneuve. If the two teams finish level on points at the end of the LFB regular season, then Calais will finish ahead of them due to their aggregate score victory. 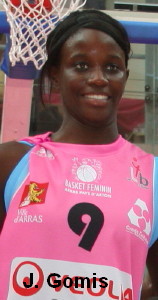 Aix-en-Provence connected 11 times from the land of many. They won the battle of the boards and had more assists than Arras but still ended up losing this LFB match.

Arras had to thank Johanne Gomis (left) and Pauline Akonga N’Simbo who combined for a total of 43 points in their (72-65) victory.

The LFB match turned into an exhibition of long distance shooting with both teams giving all from the tip-off.

The pace did not drop during the second quarter. Yet center stage took the youth internationals Olesia Malashenko and Adja Konteh from Arras to open up a 5-point lead until French international Isabelle Strunc from Aix-en-Provence replied to bring the teams level (33-33).

Then Hurst hit her fourth trey of the game for the guests to regain the advantage (36-33) after 18 minutes.

Arras finally decided to defend. They kept their guests scoreless for the remainder of the quarter, while a trey from Gomis took them into the locker room ahead (38-36).

The pattern continued after the break with a lot of attacking and little defense.

Emmanuel Coeuret, the coach from Aix-en-Provence, called a time-out with his team trailing (47-50) with 27 minutes played.

Sabrina Réghaïssia started to make her presence felt for Aix while Akonga N’Simbo took over the scoring for Arras as the fireworks continued.

Arras went into the final quarter leading (60-55). They slowed the game down as they paced themselves to victory.

Hurst (left in picture) who went 5-of-6 from behind the arc led the scoring for Aix with 22 points.

In the third LFB game of the day Nantes-Rezé led from start to finish in beating Union Hainaut Basket (69-48).

Nantes were (25-10) in front after the first quarter. Afterwards they paced themselves to victory with Caroline Aubert conducting the plays with 8 points and 9 assists.

LFB round 15 results and points scored: