The rest of the LFB news from Saturday and Friday 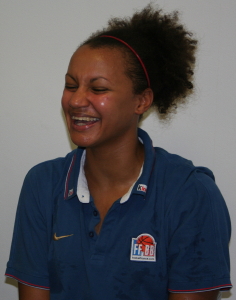 Toulouse were unable to hold on to their 11-point lead (33-22) midway through the second quarter against Tarbes and lost in overtime (65-67).

In another close finish Union Hainaut Basket were beaten at home on the buzzer by Yacine Séné (left) from USO Mondeville (66-67).

Aix-en-Provence were close on the heels of Bourges Basket for 20 minutes. They trailed by just 2 points at the interval (28-30).

Yet Bourges Basket stepped up during the third quarter in a shooting festival to lead (54-45) going into the last quarter.

All the players from Bourges scored at least 5 points in the (75-62) victory while Natalie Hurst (right) hit 23 points for Aix-en-Provence.

Villeneuve d'Ascq never recovered and scored just 15 points during the last 15 minutes which was not enough to trouble the hosts.

On Friday evening Nantes-Rezé ended COB Calais' LFB stay with a comfortable victory (77-58). Lindsay Taylor was once again on form with 20 points and 12 rebounds for Nantes.

Another LFB success on the road for Basket Landes 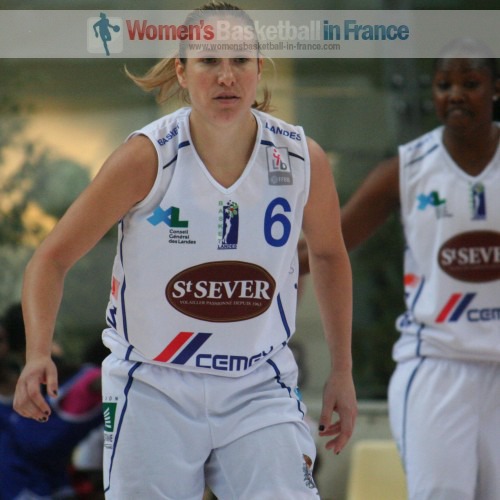 Basket Landes trailed for 38 minutes against Arras but walked away with a victory (67-63). Katarina Manic (in picture) from Basket Landes with 18 points and 5 assists was the hero of the day.

The final LFB match of the weekend turned out to be difficult for the officials who were put under a lot of unnecessary pressure from the home supporters.

The fans of Arras were out in force and were treated to a first quarter of quality inside play by their side with Marielle Amant scoring 8 points.

Olesia Malashenko added 7 points which included a shot from the land of many as the home side dominated the first quarter (23-17).

Tamera Young and Jennifer Humphrey started to dominate the rebounds for Basket Landes during the second quarter.

The free-flowing scoring of the first quarter stopped and the game became more physical. However Arras maintained their advantage going into the interval (37-32) by hitting 6-of-7 from the charity stripes.

Arras appeared to have everything in control with a 9-point lead (50-41) after 29 minutes played.

Basket Landes finished the third quarter on a high with a Julie Barennes three-pointer buzzer beater and trailed by just 4 points (46-50).

The match became more physical and the officials were calling fouls right, left and center.

Arras were still in front (57-56) with three minutes to play when Humphrey fouled out for Basket Landes.

Instead of Arras taking advantage of this situation, it was Basket Landes who turned things around with Manic and Marion Laborde combining for 9 of their team's final 11 points.

Basket Landes' ambition this season in the Ligue Féminine de Basket is a place in Europe next season and this victory keeps their ambitions alive.