Basket Landes failed to make up the deficit 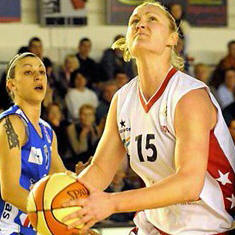 Straight from the tip-off, Basket Landes went on the attack and scored the first points of the game through Jennifer Humphrey.

Valeriya Berezhynska (left) responded on the next attack for Mondeville.

However Basket Landes continued to attack with Marion Laborde, Bineta Diouf and Anaïs Le Gluher all getting on the score board as they went 6 points clear with four minutes on the clock (10-4).

Aurélie Bonnan and Berezhynska did most of the scoring for Mondeville as they reduced the deficit to 3 points (11-14) with three minutes left in the first quarter.

Basket Landes had no choice but to continue attacking and pushed the lead up to 9 points before settling for a 7-point advantage by the end of the first quarter (20-13).

Basket Landes led by as many as 10 points twice during the second quarter but were unable to level the aggregate score.

The players from Basket Landes started to tire and Mondeville took full advantage.

Bonnan and Berezhynska continued to control the paint while Touty Gandega, K. B. Sharp, Lenae Williams and Yacine Séné added important points in coming to within 2 points of their hosts (30-32).

Katarina Manic's (2+1) at the buzzer enabled Basket Landes to go into the locker room leading by 5 points (37-32).

The yo-yo continued between the two teams after the break. The first three minutes belonged to Basket Landes who for the third time in the match led by 10 points (46-36).

Mondeville then picked themselves up to control the following five minutes, keeping their hosts scoreless while scoring 8 points.

Basket Landes managed to end their scoring draught with a pair of free throws by Le Gluher with 20 seconds remaining to play in the quarter.

However Bonnan (right) had the last word for her 19th points of the match to close the quarter (47-48).

Basket Landes needed to win by 12 points or more to qualify for the final but had the worst possible start to the final quarter allowing the pendulum to swing in favour of their opponents.

Mondeville scored added 7 consecutive points to conclude a 9-0 run to lead for the first time in the game (54-48) with 32 minutes played.

Basket Landes picked up the pace and scored 12 points in less than three minutes (61-56) to go back in front.

But Basket Landes were not able to maintain neither pace nor intensity during the final five minutes and managed just 4 more points to win the game (65-63) but to lose the series (124-133).

Basket Landes' fifth place finish during the LFB regular season should be enough for them to qualify to the EuroCup Women next season. So all was not lost for them in defeat.