Bourges went on the attack from the tip-off and despite missing their first three shots opened the scoring through their captain Emméline Ndongue.

Ndongue showed her defensive side with a block against Jelena Dubljevic moments later.

Brooke Smith stripped the ball of Styliani Kaltsidou and fed a pass to Dubljevic who then scored Tarbes' first points of the game.

Anaël Lardy fired in a trey for Bourges. But Roneeka Hodges replied with back to back baskets and a free throw for Tarbes to take the lead briefly (7-5).

Pierre Vincent started to turn his bench with his team stepping up defensively keeping Tarbes scoreless for more than three minutes. At the same time they went on a 9-0 run concluded with a trey by Jennifer Digbeu (14-7).

Bourges maintained the advantage all the way till the end of the quarter (18-11).

Dubljevic started to make her presence known with a couple of baskets for Tarbes.

However Bourges continued their festival from beyond the arc with Maja Miljkovic and Paoline Salagnac enabling them to open up a double digit lead (26-15) after 12 minutes. 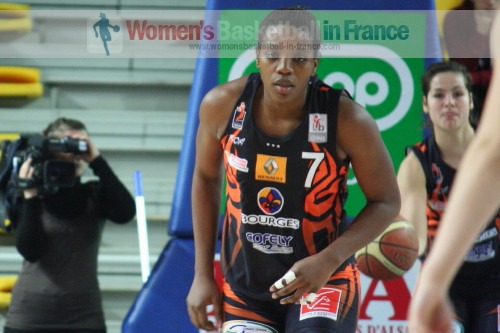 Nwal-Endéné Miyem (left) more or less took on Tarbes by herself by scoring 8 of her team's last 10 points, which helped them to maintain a 10-point lead going into the locker room (36-28).

Ndongue scored the first 6 points of the third quarter as Bourges stepped on the accelerator.

Cathy Joens added 2 more points which forced Alain Jardel to call for a time-out with his side trailing (26-44) with 24 minutes played.

Tarbes managed to stop Bourges from scoring and started a run of their own with Hodges, Florence Lepron and Dubljevic all scoring (32-44).

Bourges woke up and started to find their way to the basket. They stretched their lead to 15 points (50-35) with 90 seconds left to play in the third quarter.

Hodges hit a three-pointer for Tarbes but two free throws by Lardy allowed Bourges to start the final quarter (52-38) ahead.

Bourges Basket basically stopped Tarbes from playing basketball and the game was not interesting to watch.

Hodges was left to play on her own: she fired in a trey but Bourges maintained control.

Salagnac went on the attack for Bourges and more or less put the game out of reach for Tarbes. She scored 5 points quickly, followed by 2 points for Ilona Burgrova.