Turkey open the 2012 FIBA
U20 Championship with a victory

Turkey got their FIBA Europe U20 championship off to a perfect start with a comfortable victory against Ukraine (86-61).

A 15-0 run concluded during the second quarter set them on to victory. They had a balanced scoring attack with four players in double digits but more importantly nobody played more than 30 minutes.

View some after-match comments by Emel Güler in English and Turkish:

(The picture gallery is at the bottom of the page)

Turkey's hustle, speed and calmness did the trick 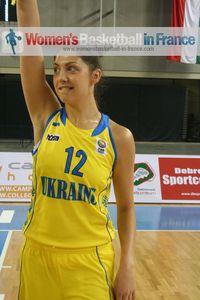 The first four minutes of the game turned into a Oleksandra Chek show with a perfect 4-of-4 from the field as Ukraine rased off to a (16-5) lead.

The Ukraine were deadly behind the arc with 4-from-5. The last five minutes of the quarter belonged to Turkey and Özge Kavurmacioglu as her side fought back.

Kavurmacioglu hit two big three-pointers while Aysegül Günay became comfortable running in the point. To make matters worse for Ukraine, Chek was already in foul problems with 2 and had to return to the bench.

The two teams finished the first quarter all square (21-21) but the pendulum was swnging more in favour of Turkey.

Turkey started the second quarter with a 10-0 run, made up of fast breaks and hustle plays while Chek was back on the bench with 3 fouls.

Turkey continued to share the ball. Even when Ukraine gave the impression to come back, they did not panic and weathered the storm to lead (48-35).

The second quarter belonged to Pelin Bilgic (11 points) who gave a master class in the act of composure as Turkey blew Ukraine away (74-47) by the end of the quarter.

Ukraine tried to make something from this game. But with Oleksandra Chek fouling out and Alina Iagupoa as the only offensive they had no chance.

Turkey opened the FIBA Europe U20 Championship with a (86-61) victory.