"FIBA Europe would like to clarify the following regarding the issue of the hospitalisation of a number of players, team delegation members and Organising Committee staff at the U20 European Championship Women 2012 in Debrecen, Hungary.

On the opening day of the tournament 22 players were affected by sickness and a total of 32 persons, including delegation members were hospitalised.

Seven of them were taken to the University Hospital, while 25 have been under observation in the Department of Infection at Kenézy Gyula Hospital.

The majority of the players have returned to their teams, with the last ones are expected to be released from hospital on Monday.

Since this outbreak, the local health authorities have provided assurances that the situation is under control. The Public Health Service has launched an investigation to determine the cause.

In a meeting on Sunday, all teams were informed about the first results, which indicate that the players were infected with salmonella.

According to preliminary results, the players most probably contracted the virus during the opening ceremony dinner on Wednesday.

The restaurant where the dinner took place is not connected in any way with the teams' hotel. The final full set of results will be available on Tuesday.

The management of the teams' hotel have been taking proactive measures from the start of this outbreak to provide the highest hygiene standards and help the teams in the best possible way.

The Local Organising Committee are also making every effort possible to ensure a fast and complete recovery, as the health of all participants is of course the highest priority." 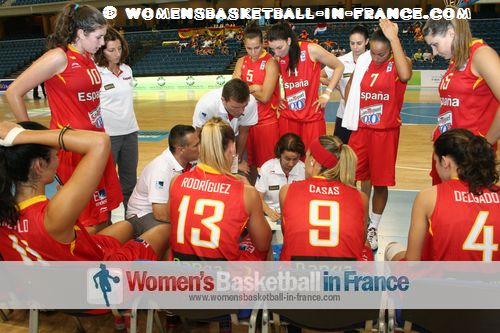 Spain are the Queen of youth basketball in Europe and the U20 defending Champions used a 16-0 second-quarter burst to blow away the Netherlands (71-40) to book their place in the quarter-final.

Queralt Casas with 10 points during the second quarter was once again the Spanish catalyst.

Turkey also booked their quarter-final place by beating Serbia (56-45). It was only during the last five minutes of the final quarter that Turkey were able to pull away.

Back-to-back three-pointers by Ozge Kavurmacioglu and Ayse Cora finally broke the resistance of Serbia. Kavurmacioglu playing with a smile on her face finished the game with 17 points and 14 rebounds.

Elsewhere in the qualifying round the Slovak Republic fought their way to victory against Ukraine (72-63), while Russia beat France (62-59) in the last few seconds (62-59).

The first 20 minutes of the match between Sweden and Belarus resembled a technical chess match which Sweden won (45-40).

However after the break Sweden started to play the type of basketball that have made them one of the best FIBA Europe youth nations. A 9-0 run (63-49) in the third quarter put them in charge for good and they paced themselves in the final quarter to win (76-65).

Farhiya Abdi and Ellen Nyström both scored 15 points for Sweden while Maryia Filonchyk compiled a double-double of 21 points and 10 rebounds for Belarus.

In the other qualifying round game Poland recovered from a (6-26) opening quarter to beat Lithuania (53-50).

In the Relegation Group Italy had to work hard before overcoming a spirited Portuguese team. The Italians relaxed a little too much after leading (30-15) at the break and needed the clutch shooting of Alice Nori and the strength of Nene Diene to see them through in the end (57-48). For Portugal Daniela Domingues led the way with 17 points.

In the other game Latvia rolled past Great Britain (77-56). Latvia hit three-pointer after three-pointer (14-of-34) against a depleted GB team.