Portugal are playing in their Division A FIBA Europe European Championship with an objective of surviving a drop. For the first 30 minutes against France they gave a good account of themselves.

Eugénio Rodrigues explained after the game that the fourth quarter had been just a little too much but otherwise he was satisfied with the performance.

Portugal have been a traditional division B nation. This is the first time that a youth team plays France in a youth international tournament since the creation of the two divisions.

Grégory Halin spoke with us after the game and said that the match against Portugal had been difficult for them because of the way their opponents played. Yet they have had the victory and could work on some of the weak points.

You can listen to his full interview below:

France was made to work hard for their victory 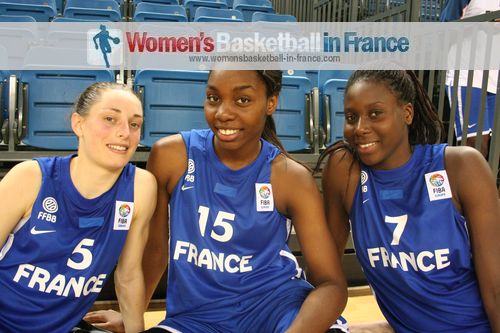 The first ten minutes of the game were very defensive despite the electrifying start by France with Alice Nayo scoring on the very first attack.

Portugal were soon on the scoreboard. But the early sea-saw battle was won by France and Héléna Akmouche with back to back scores (6-4).

Portugal continued to hustle and their efforts paid off with Maria Andrade standing in her favourite position at the top of the key for a three-pointer (9-6).

The Portuguese players used a lot of energy for the rest of the quarter and held onto the advantage (13-12) despite the indivual efforts of Adja Konteh.

Portugal scored first in the second quarter but then stopped for almost four minutes. In that time France mixed zone and half court press to take the lead (19-15).

The rest of the quarter was slow offensively. France alternated between zone defense with full court press while Portugal basically hustled for everything.

The result was France went into the locker room leading (24-19) and both coaches shaking their heads.

The third quarter also did not see much scoring. Portugal did not have the offensive power so used a lot of energy in defense making France work hard.

However once Margaux Galliou-Loko and Sara Chevaugeon for France started to find their range from the perimter, it was all over for Portugal. Then France strolled to victory (55-33).