It was quarter-final day at the FIBA Europe U20 Championship Women Division A. Spain eliminated France (55-53) while the Netherlands knocked out the Ukraine (71-63). Turkey and Russia also booked their places in the last four.

Russia qualified for their fifth straight U20 semi-final after hitting an avalanche of three-pointers (9 in total) to see off Sweden (73-65).

Russia had their usual issues in taking care of the ball turning the ball over 16 times. However Sweden were having an off day and were not able to take advantage of such gifts.

Russia will take on the Netherlands in the semi-final. 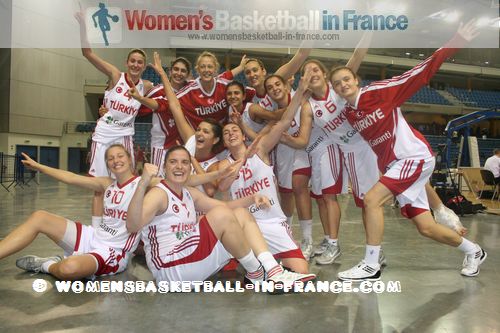 Turkey are the only team not to have suffered a defeat in this competition but they did not look the all conquering team against Belarus.

Aziz Akkaya, the Turkish coach was concerned that the pressure of trying to win the first medal at a youth European women's championship might get to his players.

He was right to be worried with his team trailing (35-40) during the third quarter. However a 13-0 run finally put Turkey in charge as they rolled to victory (66-61) with 12 points apiece by Ayse Cora and Pelin Bilgic.

You may watch the game highlights below:

Italy are one win away from winning the relegation group after beating Portugal (56-52). In the other game Latvia beat Great Britain (72-61).

These results mean that Great Britain and Portugal have been officially relegated.