It was a tough on the first day of FIBA Europe basketball action in Debrecen with several players and an assistant coach becoming ill.

At the moment the official source for the outbreak is not known but the Serbian team have had the highest number of casualties.

All the games from Group C and D were played in the Főnix Hall which has seating for 6000 people. In the very first game of the day Turkey overcame a slow start to blow away Group C rival Ukraine (81-66).

In the second game from the group which we also covered France were made to work hard by Division A newcomers Portugal before coming away with a comfortable looking victory (55-33).

Speaking with some of the French players after the game, the common theme was the relief that they had played the game and won it. 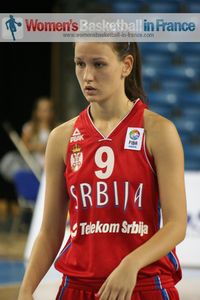 In the first game from Group D, Serbia pulled off an amazing win with the last shot of the game in overtime against the Slovak Republic (68-67). Natasa Kovacevic (in picture) with 20 points - who starred for Serbia in the U18 championship this summer - came up with the winning shot.

For Serbia, this was an amazing victory because two players were absent because of the sickness and a few others were not at 100%.

The Slovak Republic also had a major scare when Martina Kissova was clutching her knee seven minutes into the first quarter.

She was taken off and only returned to the game during the third quarter and somehow finished the game despite looking uncomfortable. Kissova suffered an ACL injury at the U20 tournament last year against Germany in the relegation round.

Serbian coach Radenko Varagic was delighted with the victory due to all the problems his team faced with players falling sick and the absence of his assistant. He also reminded us that he was proud with his youngest player in his roster Kovacevic and that they could not celebrate for long because they have other big games in this FIBA Europe Tournament.

You can listen to the after-match comments by Milica Toskovic below: 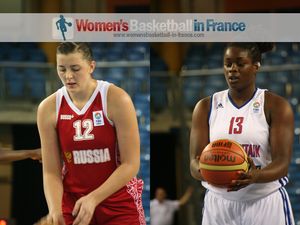 In the other game Great Britain once again gave a performance why they are a team that traditional division A nations do not want to meet.

It is possible that some Russian players might be ill but Great Britian lost Gemma Bullard before the game even started and during the game Maisie Elston became ill.

Despite a good start (20-11) Russia were not able to to pull away. Instead Great Britain kept chipping away at the score and even threatened to go in front by the interval.

The Russians really have to say thank you to Alexandra Stolyar (13 points) whose three-point shooting kept the British side at bay.

However the big match-up in the game was between two 1995 born players: Ksenia Tikhonenko and Cheridene Green (above in picture).

Green was a late replacement for GB and was called into action because unlucky Jessica Hurd had no luck with the officials and was in foul problems with less than five minutes played.

The game turned into hard work for both sides. Russia won (55-49) but Great Britain had the chance to pull off a big win. For Great Britain Renee Busch was the game leading scorer.

In the games from the smaller arena Lithuania out-muscled the smaller but quicker Latvians in the most physical game of the day (71-66). With this victory the Lithuanians opened up their Group A campaign at the FIBA Europe U20 European Championship Women.

Spain walloped Belarus (73-39) while the Netherlands huffed and puffed to get a win against Italy (72-67).

Sweden outscored Poland (56-54) in a game full of twists and turns.

You can watch the FIBA Europe highlights below: