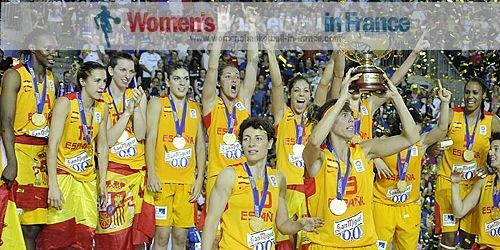 The 34th edition of the European Championship for Women, called EuroBasket Women 2013, is hosted for the fourth time by France. In 2001 France won the competition as hosts. FIBA Europe are once again the governing body organising the event.

From 15 June 2013 until 30 June, 16 nations are competing for the title of European Champions. In addition 5 teams also qualify for the 2014 FIBA World Championship for Women (FIBA World Cup) to be held in Turkey.

Five venues have been selected for this championship: Lille, Orchies, Trélazé, Vannes and Vendespace. The Final is staged in the new arena in Orchies which has a capacity for about 5000 people.

The draw was conducted in Paris at the UNESCO house on 21 September 2012 and the teams were split into the following groups:

The competition format remains the same as the previous edition with three phases. The first round has 4 groups of 4 teams playing between 15-17 June 2013. The bottom team from each group is eliminated.

The second round consists of 2 groups (E and F) of 6 teams with matches to be played between 19 -23 June 2013. The bottom 2 teams from each group are then eliminated. 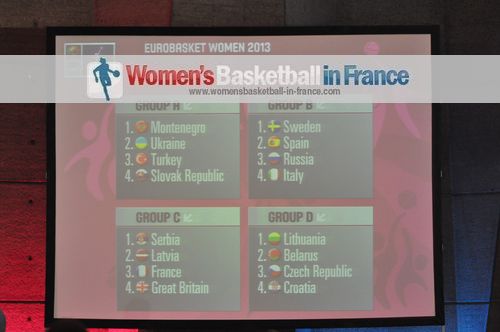 This page serves as the womensbasketball-in-france home page for the 2013 EuroBasket competition and all the links for this edition appear on the right-hand side of this page.

30 June 2013: Spain are champions of Europe for the second time

28 June 2013: France and Spain to meet in Final, Belarus qualify for 2014 World Championship

17 June 2013: Latvia, Russia and Ukraine miss out on qualification

16 June 2013: 7 teams qualify for next round - Lithuania eliminated