Turkey are back in the semi-final of an EuroBasket Women tournament after beating Belarus (55-41) in the third quarter-final.  Turkey who have already qualified for the 2014 World  Championships as hosts made the Czech Republic smile.

The Czech Republic, eliminated from EuroBasket Women by Spain (60-80) in the quarter-final, qualified for the match for fifth place by beating Italy (72-68).

With Turkey's victory, the Czech Republic and their opponents for the 5th-place classification match have qualified for the 2014 FIBA World Championship for Women.

Turkey, silver medallists in 2011, are still on track for a podium finish.

Nevriye Yilmaz did most of the hard work in the paint during the first 20 minutes in which she scored all her 10 points. Saziye Ivegin finished as the top scorer with 13 points.

It has not been a solid EuroBasket Women campaign for Belarus. However they still have a chance of going to the World Championship if they can win their next match.

You can find the match report of womensbasketball-in-france below with the FIBA video highlights of the game.

Turkey, still in the race for EuroBasket Women title 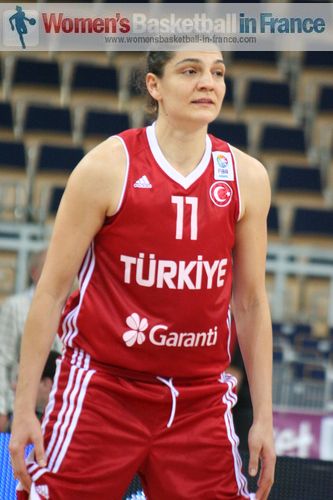 The first quarter turned into a tactical round of observation with neither side able to take control. Turkey took more risks and edged the first quarter (14-10) with 5 points apiece by Isil Alben and Nevriye Yilmaz (in picture).

25 seconds in the second quarter Quanitra Hollingsworth, the pivot  from Turkey, picked up 2 fouls which resulted in her going to the bench.

Aliaksandra Tarasava hit another couple of points for Belarus before Turkey once again regained control with a three-pointer by Yasemin Dalgalar.

Belarus went scoreless for over six minutes while Turkey helped themselves to 15 points (31-15).

Katsiaryna Snytsina ended the barren spell for Belarus with a trey for what turned out to be the last score of the first half.

Turkey, with 4-of-7 from behind the arc, went in the locker room with a comfortable advantage (31-18) and 10 points for Yimez.

Belarus came out from the locker room with more urgency and outscored their opponents 8-2 during the first four minutes. Turkey's head coach Ceyhun Yildizoglu then called a time-out.

Thereafter Hollingsworth scored her first points of the game as Turkey started playing basketball again. However Turkey suffered a major scare with Birsel Vardarli rolling her ankle after landing on the foot of Natallia Anufryienka with 5:39 to play in the quarter.

Snytsina continued to be the driving force for Belarus with 12 points as her side reduced the deficit to 8 points by the end of the third quarter (33-41). 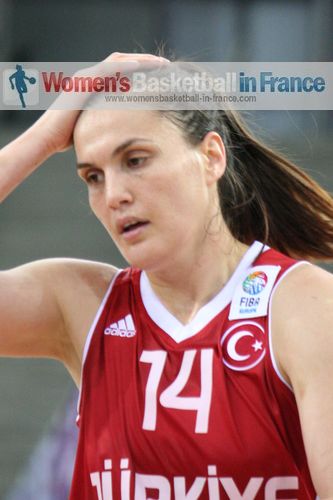 The final quarter was intense but sloppy with a lot of careless plays.  Turkey maintained their advantage (46-37) with 5:30 to play. Vardarli was brought back into the game for the last five minutes to control the pace of the game for Turkey.

In the meanwhile Belarus were not scoring while picking up foul and after foul. After almost four scoreless minutes from either side
Saziye Ivegin (in picture) scored 5 points in 10 seconds for Turkey (51-37) which more or less ended the game as a contest.

Turkey went on to win (55-41) to book their place in the EuroBasket Women semi-final.