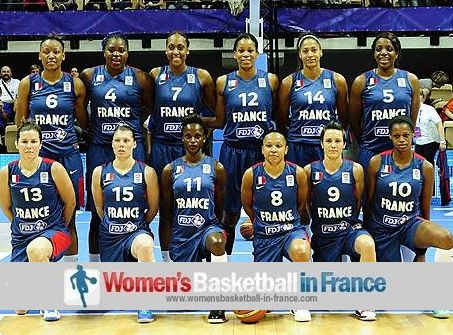 France continued with their EuroBasket Women opening day demolition of Latvia with a comfortable victory against Serbia (76-32). Elsewhere Belarus, Croatia, Czech Republic, Great Britain, Spain and Turkey punched their tickets for the qualification round.

Top scorers from each game and video highlights from all the matches are to be found after each wbbif's group report:

Lithuania became the first team to be eliminated from this edition of EuroBasket after losing to the Czech Republic (51-70) in their Group D encounter.

Due to Belarus beating Croatia earlier in the day (57-43), Lithuania had no choice but to beat the Czech Republic to stay in the competition. Yet a second-quarter meltdown (8-25) sealed their fate.

With their elimination, Belarus are guaranteed the group win and will take maximum points into the next round while the Czcech Republic and Croatia will battle for the second place and the important points for the next phase.

France continue to thrill their supporters with a comfortable victory against Serbia (76-32).

Isabelle Yacoubou-Dehoui who went a perfect 7-of-7 from the floor in game one missed her first shot of the tournament (5-of-6) while scoring 10 points. Gaëlle Skrela had the pleasure of leading the French attack with 14 points.

Great Britain also booked their ticket for the next phase after seeing off Latvia (69-56). The third-quarter buzzer beater of Kim Butler, who played a lot of her club career in Latvia, was the shot of the match. She finished with 14 points before fouling out for the second consecutive game.

Group B - Spain qualify while Sweden down Russia

Sweden have one foot in the qualification round of the 2013 EuroLeague Women after their historical victory against Russia (68-57).

Even with the complex three-way tie rules of FIBA Europe in case of Russia beating Italy in the final game, it should mathematically be impossible for Sweden to be eliminated even if they lose to Spain.

Sweden were too physical for Russia. They took the Russians out of their stride early on. Russia's poor finishing did not help them down the stretch as they went on to suffer defeat number 2.

Russia's fate is now in their hands provided they beat Italy. If Sweden beat Spain in the final group game, then Russia just need to beat Italy. But if Spain beat Sweden, then Russia must beat Italy by at least 7 points.

In the other game Spain booked their place into the next phase with a scrappy victory against Italy (71-59).

Sancho Lyttle's double-double of 19 points and 13 rebounds and Elisa Aguilar's three-point shooting early on was all Spain needed to control the game.

Turkey had the worse start possible in their second game at the EuroBasket Women 2013 allowing Montenegro to score the first 12 points of the match.

Tugce Canitez with 5 of Turkey's first 7 points was the team's catalyst as they battled their way back into the game. Trailing (12-21) by the end of the first quarter they powered their way into the lead by the interval (29-28) with some excellent defensive plays.

During the third quarter Turkey were able to break away with more consistent shooting and a three-point buzzer beater by Esmeral Tuncluer (47-38).

Turkey remained calm for the rest of the game and booked their ticket for the EuroBasket Women Qualification Round with their second victory (66-57).

Lukacovicova finished with 23 points, 9 rebounds, 3 steals and 2 blocks in her best game in the national jersey. Kupcikova was also active with 18 points, 8 rebounds and 6 steals.

Ukraine led for the first 13 minutes of the game with Alina Iagupova leading the way with 13 points. However once the Slovak Republic edged in front, the Ukrainian players retreated and never really challenged.

Ukraine can still qualify for the next round by beating Montenegro which would mean that the Slovak Republic would be eliminated if they lose to Turkey.