Lyon Basket Féminin have been given a second chance in promoting women's basketball in Lyon after a disastrous first attempt last season (2011-2012).

This season Lyon has a roster that resembles that of Challes-les-Eaux which puts them in the category or regular season favourites with Bourges Basket.

In 2011-12 Lyon BF finished in 13th place and were heading to Ligue Féminine 2 until a possible merger with Challes-les-Eaux was proposed.

In the end Challes-les-Eaux disappeared and Lyon were able to keep its LFB status.

Pierre Bressant was the first casualty of the poor season. He was relieved of his duties as head coach in April 2012, after their last game.

Most of the players were on contracts for one season and their contracts were not extended.

Charline Servage had not been released but with no certainty of her role under the new coach Laurent Buffard, she decided to find another club.

In the end Buffard had no recruiting to do because all the players from Challes-les-Eaux with the exception of Anaël Lardy joined Lyon.

Challes-les-Eaux finished in 3rd place last season and had been one of the best teams in France over the last two seasons.

Buffard more or less has his dream team: Emilija Podrug and Mame-Marie Sy Diop played for him at Nantes-Rezé while Audrey Sauret was a key player for him at USVO.

Lyon are one of the favourites for the title this season and when Mistie Mims returns from the WNBA they should be at full strength.

Last season Lyon Basket's management team gave the impression that the marketing of their tunic was important. In the end Bressant did not keep his promise of modelling it which is just as well because for this season they have changed suppliers and design. 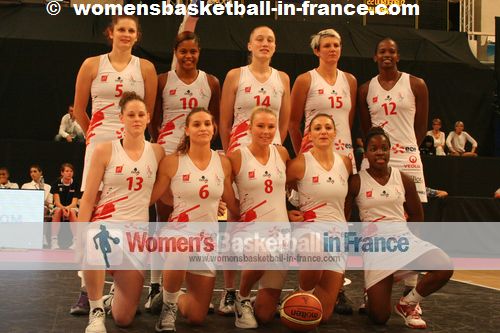 01 October 2012: Aix-en-Provence ready for a construction job by Bruno Blier

01 October 2012: Arras Basket Féminin have EuroLeague Women on their mind