FIBA Europe have announced the start of the public voting for the player of the year awards: senior men, senior women, young men and young women.

The public voting ends on 31 Janaury 2013. Every person who votes is automatically entered in the draw with the chance to win exclusive prizes, including tickets to EuroBasket 2013.

Players in all categories have been selected by FIBA Europe for their performances and special achievements during the calendar year.

All the players nominated are known to us at wbbif and we have included links to our articles or interviews with them.

In order to vote you have to visit the site of FIBA Europe by clicking on the link below:

Vote Here For Young Women's Player Of The Year 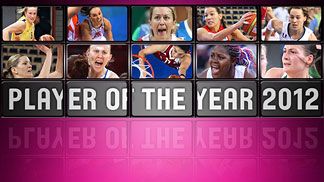 All the players nominated played in the EuroLeague Women competition last season and have never won the player of the year award.

Ann Wauters from Belgium was the only player not to play for her national team during the summer. At least one player from the five European teams at the 2012 Olympic Games has been nominated, with France having two players.

Vote Here For Women's Player Of The Year

Vote Here For Young Men's Player Of The Year

Vote Here For Player Of The Year