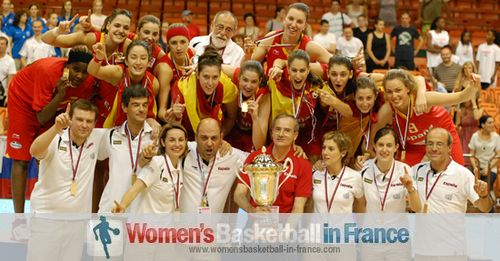 It was a calm start by both teams with Russia getting on the scoreboard first with Alexandra Tarasova. However Spain did not waste much time in scoring with Queralt Casas (in picture).

In fact Casas dominated the scoring in the first five minutes with 8 of her team's 10 points as Spain opened up with a (10-4) start.

The game became rather static and technical with neither side pushing the ball around with much confidence.

Yet Casas had the last say with a buzzer beater for her 12th point to end the first quarter (16-10) for Spain.

The second quarter was rather defensive with both teams making scoring difficult. Russia kept Spain scoreless for four minutes but just managed 4 points themselves.

Once Spain scored, nothing could stop them as they went on a 8-0 run and then paced themselves to go into the locker room (29-21).

After a slow start at the beginning of the third quarter the match came to live in the final two minutes Russia worked on one weakness of Spain by concentrating on the perimeter. With two minutes to play Evgeniya Finogentova hit a corner trey for Russia to briefly lead.

Spain were quickly down the other end with Tanja Perez for an AND-1.

Spain picked up the pace with Laura Arroyo but were caught napping as Anastasiya Shilova fired in a trey.

All the same Arroyo showed she can hit from beyond the arc. However the quarter ended in confusion from the Spanish eyes as Veronika Dorosheva bashed her way to score on the buzzer.

Spain's advantage going into the final quarter was just 2 points (42-40).

It was crunch time for Spain and Leonor Rodriguez came up big for Spain. Despite a trey from Viktoria Medvedeva, Spain were on a run and with five minutes left to play they led by 11 points (54-43).

Spain controlled the pace of the game for the remaining minutes and went on to win comfortably (62-53) with tournament MVP Queralt Casas leading the way with 21 points.

The two teams played very quickly at the start of the match while cancelling each other out offensively.

Magdalena Zietara (in picture) was doing most of the scoring for Poland with 8-of-11 team points as they led midway through the first quarter (11-8).

For Serbia Sara Krnjic was as solid as a rock but her team kept on getting hit on the counter and found themselves trailing (15-10) with four minutes to play.

Serbia finally found a way of stopping their guests from scoring. They finished the quarter strong and drew level (17-17) with a split pair from the charity stripes by Snezana Colic.

However Poland were able to hit on the fast break and Magdalena Idziorek scored the last points of the first quarter (19-17).

Poland's fast break and speed caused Serbia all kinds of problems as they continued to lead the game (31-26) midway through the second quarter.

However Serbia were starting to find solutions and with 4:34 to play Marina Markovic fired in a corner trey. Immediately Poland called a time-out (31-29).

One more Poland got back on top to stretch their advantage (36-31). Poland did have some concerns when Malgorzata Misiuk (left) went down - she had taken a knock to the same ankle during the semi-final.

She was helped of the court with 1:31 to play but her team did not miss her as they went into the locker room with a double-digit advantage (41-31) after a three-ball by Dorota Mistygacz.

As expected Serbia stormed back in the third quarter: Krnjic and Tijana Ajdukovic started to dominate inside while Markovic shot from beyond down-town.

Serbia - pushed by their home supporters - went in front with five minutes left in the quarter. Poland wrestled the lead back briefly. But a corner trey by Nikolina Nikolic put the hosts back in front.

For the remaining three minutes it was up and down basketball with Serbia holding on to the advantage until Joanna Markiewicz fired in a buzzer beater to tie the game (54-54).

For the first 6 ½ minutes of the final quarter just 2 points each were scored and there was a lot of pushing and shoving.

Then fireworks started as the tempo went up with three-pointers flying in from all over the court by Serbia and Poland counter attacking.

In the end it went down to the wire after Sniezek split a pair of free throws.

Serbia had about two seconds left to play and Marina Markovic (right) had no choice but to shoot and she did. The ball hit the ring and bounced off.

Queralt Casas has been voted MVP.

She is joined in the all tournament team by Anastasiya Shilova from Russia, Alina Iagupova from the Ukraine, Malgorzata Misiuk from Poland and Sara Krnjic from Serbia.

France survived a late comeback by the Ukraine to win the fifth place match (63-62).

Grégory Halin used a time-out with 15 seconds to play with his team trailing (61-62). He set up a play for Isabelle Strunc (left) which worked to perfection.

Linda Bousbaa held the ball as possible before moving left creating space for Strunc who then took two steps forward and released a perfect jump shot.

Two seconds remained and Ukraine used all their time-outs. However the option was clear: get the ball to Alina Iagupova.

France brought on for these two seconds the tall players to defend. The ball did not get cleanly to Iagupova. Yet she somehow fired a shot but it was off target.

Halin who has shown little emotion in this tournament almost broke the world record for a standing jump.

For France Hhadydia Minte (21 rebounds), Strunc and Clémentine Samson all had double-digit scores with 15, 14 and 10 points.

In the match for 7th place Italy used a three-point festival in the first half with 6-from-7 to beat Great Britain (60-48).

For Italy Federica Tognalini led Italy with 17 points and 10 rebounds before fouling out while Laura Spreafico had 12 points. For Great Britain Katrin Chiemeka and Temi Fagbenle both scored 10 points. 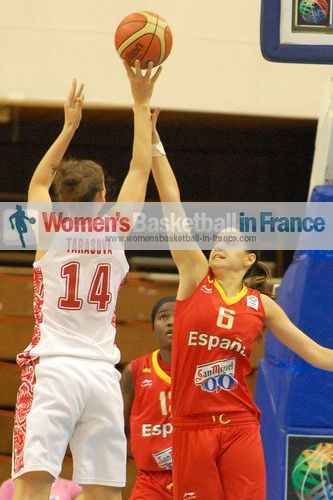