Russia powered their way into the final

After a nervous opening from both teams Russia got the show off the road with a corner trey by Anastasiya Shilova (in picture).

Russia then used their power and strength to open up an early lead (9-2).

Russia changed tactics and and regained control with a trey by by Yana Panevina. Then Shilova took over with back to back scores.

However Poland had the last say of the first quarter with a well worked move that opened the way for Magdalena Idziorek to hit a clutch three-pointer just before the 24-second buzzer sounded.

The game changed completely during the second quarter as Poland won more rebounds. Russia started to miss scoring opportunities while Poland were able to draw level (21-21) with 5:38 remaining in the quarter.

Russia muscled their way back into the lead from the free-throw line and appeared to have control after Veronika Dorosheva fired in a three-pointer from the top of the key.

But on the very next play Monika Jasnowska responded with a big three and the pendulum was changing in direction of Poland.

Back to back scores from Malgorzata Misiuk tied the game (28-28).

Poland was on a run and Misiuk in her element as she drew another foul and was back on the charity stripes for 2 more points.

Poland completed the 9-0 run with 2 more points by Agnieszka Sniezek to go ahead into the locker room (32-28).

It was up and down basketball to start the third quarter with both sides engaging in a physical battle.

For Russia Evgeniya Finogentova was in her element scoring the first points of the half and later hitting a trey from the top of the arc to bring the teams level for the fourth time (36-36) in the match with 23 minutes to play.

Russia were soon back in front with Shilova scoring her 15th point of the game.

It did not get better for Poland as Viktoria Medvedeva (left) went on the offensive with back to back scores (43-36).

Misiuk ended the Russian scoring sequence but Dorosheva had the last say with a trey 90 seconds before the end of the quarter (46-38).

It rained three-pointers to start the final quarter as Russia opened up double digit lead (56-43) with just under seven minutes to play.

Poland were to receive a blow when Misiuk slipped and fell. She had to be helped off the court with 6:21 to play. She did return to the game with 3:55 to play but Russia was on a roll.

Magdalena Zietara tried to rally her team-mates from Poland at the end but Russia had too much of an advance.

Shilova ended the game with her third three-pointer of the night for the last score of the match with 10 seconds to play.

Russia are the defending FIBA Europe U20 European champions and are hoping to be the first team to defend the trophy. 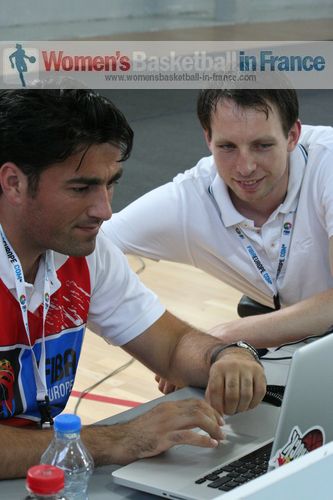