Latvia had a brilliant first 20 minutes and shot 62 percent from the field to dominate France (44-41) at the break.

However things changed in the second half with Sabine Niedola just scoring 1 point while for France Isabelle Strunc (left) hit 10 points in the third quarter.

Niedola (15 rebounds) and Dita Rozenberga had 19 and 11 points for Latvia.

Fiba European game report: France come back in the second half

Latvia went on the charge from the tip-off and were on the scoreboard with four seconds played after a pair from Anete Kirsteine.

Despite France fighting back quickly and three-pointers exchanged by Kirsteine and Linda Bousbaa (right), Latvia were dictating the pace.

France did lead briefly with a three-pointer by Isabelle Strunc but Latvia were winning all the fast breaks. Dita Rozenberga and Sabine Niedola scored at will for Latvia to win the first quarter (25-20).

The two-minute break did France good as they got back to business offensively and defensively at the start of the second quarter with Ondaye-Akoa Elenga and Kelly Corre getting on the score board.

When Liga Surkusa was given all the space in the paint to score the teams were back on level terms with Clémentine Samson connecting from the land of many.

France were having their best spell in the match. With a second trey by Samson and a baseline jumper from Corre they led (38-31) with four minutes left until the break.

France were not really guarding Niedola. So she started to cause mayhem as she picked up back to back And-1s to bring her team back into the match. She also split a pair to complete a 9-0 run for her team to take the lead.

Despite a spectacular 24-second buzzer beater by Touty Gandega for France, Latvia were able to wrestle the advantage back.

Niedola did most of the damage while Surkusa defended excellent by blocking a high flying Hhadydia Minte.

Latvia went into the interval leading (44-41) with 17 points from Niedola.

The third quarter was played differently from both teams. France closed down the space more quickly, hence stopping the drives of Niedola.

France also had to rely on some clutch shooting from Strunc who was in her element as they moved 6 points clear (56-50) with her 10th point of the quarter.

Latvia finally found a solution for stopping France. In the last two minutes they rallied back to a single-point deficit (57-58) after a rainbow baseline corner trey by Anna Sonka.

The final quarter did not match the intensity of the first three quarters as France controlled the pace scoring the first 13 points to end the game as a contest with 3 ½ minutes to play leading (71-57).

Comments from Grégory Halin after their 4th Fiba U20 Europe match

The French head coach Grégory Halin is once again satisfied with the victory but stressed the importance of not taking things easy because they still had work to do to improve in certain aspects.

He was aware how quickly things could turn, so although they were in the FIBA Europe U20 European Championship Women quarter-final, he said, they had to keep their feet on the ground and take each match as it would come to be in a better condition for the final phase.

The Netherlands came out firing on all cylinders from the tip-off as they successfully destabilised their opponents in a hectic opening with Chatilla van Grinsven (left) and Maxime Essenstam doing most of the offensive damage.

However it was big threes by Tessel van Dongen that got Orange fever going to edge the first quarter. The only issue for the Netherlands was 2 early fouls for van Grinsven.

Spain adjusted in the second quarter with Vega Gimeno hitting a trey to open with her first shot.

The Netherlands started to huff and puff but maintained their lead with a Kourtney Treffers' score: an exercise in using good vertical lift and dropping the ball in.

Yet Queralt Casas hit a corner trey for Spain whereas the Netherlands lost van Grinsven with her 3rd foul (19-19) with just over eight minutes to play.

Spain started to play full court press and slowly took control of the game. On the other hand the Netherlands were having problems getting the ball over the half-way line.

The Dutch coach made an interesting change using his bench players. But Spain were too strong and went into the locker room leading (38-28).

Spain kept the Netherlands scoreless for ten minutes while scoring 16 points to lead (54-27) going into the final quarter.

Then the Netherlands broke their second half duck with 6:38 to play in the final quarter with a free throw which also ended a 22-0 run. They lost (36-73) in the end.

Spain join France in the quarter-final of the FIBA Europe European Championship Women.

The Italians started the match calmly and scored off the first attack as Federica Tognalini wrong footed everybody for an easy drive to the basket.

Great Britain responded quickly with a trey by Katrin Chiemeka. But Italy were on their way with a second basket by Tognalini and a baseline jumper by Alessandra Tava.

Both teams continued to play cautiously. However turnovers and offensive fouls stopped Great Britain from getting anything done offensively while Italy moved 10 points clear (13-3) with two minutes to play.

Great Britain went 3-of 4 from the free-throw line to reduce the deficit (6-13) by the end of the quarter.

Italy were managing to keep Great Britain at bay until Damian Jennings called for a time-out with 7:55 to play in the quarter.

He made some changes and the flood gates opened for a minute on a spark from Rebecca Allison with Kristy Sheils hitting from the corner a three-ball, quickly followed by 2 points from Jessica Hurd in the paint.

The game lost shape and became untidy. Federica Nannucci came up with something from nothing to scoop a basket for Italy while Temitope Fagbenle started to get to the free-throw line for Great Britain.

The third quarter was a rather tactical affair with Italy taking advantages of their opponents' turnovers to regain the lead for good (31-27) after Great Britain had come back with a couple of baskets by Deanne Hayward.

The coaches kept bringing players in and out as the game became scrappy. All the same Italy went into the final quarter ahead (33-29).

Italy were lucky that Tava and Nannucci were in no mood to concede the game as they scored important points to give their side the break they needed (37-31) with six minutes remaining.

The rest of the game was forgettable as the turnovers became the order of the day. A Chiemeka three-ball with 3:22 to play brought some suspense as Great Britain had a chance to steal the game.

But they failed to score again with Italy winning (44-36). With this victory Italy are looking good for qualification. 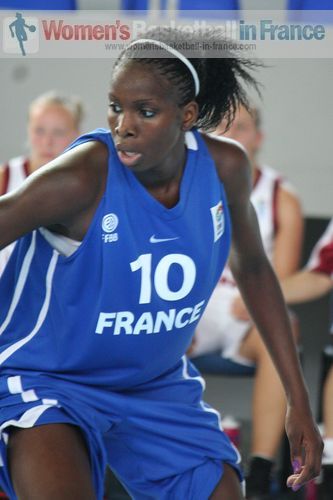