France's strong second half performance gives them the win against Belarus

France had to wait until the second half to get going. But once they did, it was one way traffic. Clémentine Samson (in picture left with Kelly Corre and Hhadydia Minte) had a field day with 20 points in 15 minutes. She hardly missed a shot. Kelly Corre worked hard defensively picking up 9 rebounds while scoring 16 points. Manon Morel, the youngest member of the team, came off the bench and used her height well to score 10 points

For Belarus Maryia Filonchyk led the scoring with 9 points. Unfortunately her side had to play most of the game without Nadzeya Bohdan who would have given them more strength inside the paint.

With this victory France have already qualified for the next phase of the FIBA Europe U20 European Championship for Women.

Fiba Europe match report: France are qualified for the qualifying round

France opened aggressively and attacked from the tip-off with Hhadydia Minte being fouled and hitting both free throws.

Then Isabelle Strunc's trey and 2 points from Kelly Corre completed the French scoring during the first two minutes (7-0).

Belarus, finally awake, got on the scoreboard with Ksenija Voishal. Belarus continued to attack and with points by Maryia Filonchyk and Maryia Papova were back on the tail of France (7-9) after five minutes.

For all the domination of France it was Belarus who did the scoring with the three-point shooting of Filonchyk and a split pair by Aliaksandra Musatava to tie the game for the first time (11-11) with three minutes to play.

A change of tactics by France resulted in 5 quick points with 2 points by Ondaye-Akoa Elenga and a trey by Clémentine Samson (16-11). Yet Belarus refused to be intimidated and only conceded two free thows while reducing the deficit by the end of the first quarter (15-18).

The second quarter showed both sides with poor shooting. However Belarus went back to basics and defended well, keeping the more athletic players from France away from the basket.

Instead Belarus with quick movements around the arc and alternating between the inside and outside scored the last 8 points of the quarter to lead (29-26).

With 5:58 to play in the quarter the game was halted after Belarusia's Nadzeya Bohdan came off second best as she was sandwiched by two French players. 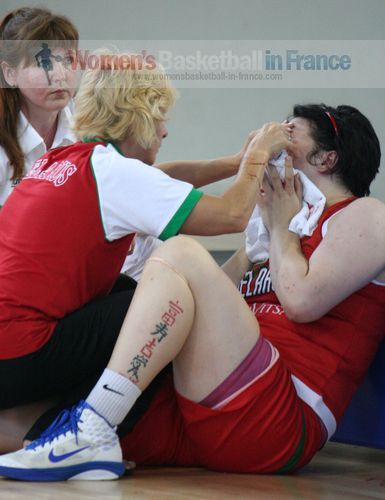 Unfortunately she was hit in the face and had to be treated for several minutes. She was taken to hospital for further treatment.

France started the second quarter with the starting five and changed the approach by pressing their opponents.

Scoring was still difficult but with Strunc and Corre scoring France regained the lead (30-29).

France took control of the match while Strunc became the leader on the court as France went on a 12-1 run to push their advantage (44-32) with 2:11 left to play in the quarter.

Herewith France were on a roll and went into the final quarter leading (48-36) and quickly extended the advantage with fast break showtime basketball with Manon Morel and Elenga getting on the end of the fast breaks (52-36).

The Belarus coaching staff conceded defeat with over six minutes to play by taking out the main five players and replacing them with the bench players. 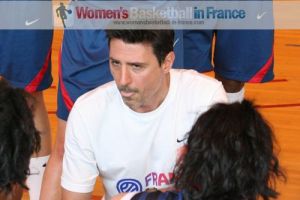 French head coach Grégory Halin explained after the match that it had been very important to win the first match in a championship and important to win against Italy because he knew that the Italians were difficult to play. The victory put the players in confidence especially after a difficult preparation.

As for the second match against Belarus, he knew it would be tricky for them due to the time, early in the afternoon at siesta.

The start was difficult as they struggled to find their rhythm. But fortunately they continued to run and he knew at some point that they would be able to put away Belarus. Luckily they gained the upper hand at the right moment.

Spain had it easy for their second FIBA Europe match win

Spain went for a full court press from the tip-off. With just six seconds played they had the first 3 points on the board by Mireia Vila.

Spain pressed hard stopping the Slovak Republic from getting the ball to the half-way line which allowed Amaya Gastaminza (left) and Queralt Casas to score (7-0).

The first time-out of the game was called with 47 seconds on the clock. However Spain did not stop and with just over three minutes played they led (13-2). In the meanwhile Gastaminza had to leave the game for treatment. But she returned in the second quarter.

The Slovak Republic could not contain the bombardment and conceded the first quarter (5-25).

They then switched to zone to slow Spain down during the second quarter but still went into the locker room trailing (15-35).

The contest was already over before the second half started. Yet it did not stop Leonor Rodriguez from delivering the official knock-out blow with a turn-around jumper (45-15) with 23 minutes played.

The only issue for Spain is the foot of Vega Gimeno who was hurt during the first quarter and tried to warm up at the interval.

Spain cruised all the way changing players at regular intervals and went on to win (59-27).

Latvia started the game as if their lives depended on it. Sabine Niedola was her usual troublesome self, but it was Kristine Vitola who did most of damage with 8 points in a (10-2) run for Latvia.

Great Britain were playing small. Yet with two treys by Katrin Chiemeka (from left to right: Erin McGarrachan, Katrin Chiemeka and Renee Busch) they stayed in touch (10-13) midway through the first quarter.

Latvia, playing with their taller players, managed to wrestle the control back and appeared to be cruising with Vitola hitting her 12th point of the game.

However Josephine Salmon managed to get down the baseline to score on the buzzer for Great Britain (13-24).

Great Britain started to run around like a swam of bees. But it was clear that Damian Jennings wanted to stop Niedola and decided to have her guarded at all times.

His strategy worked as Niedola started to miss and turn the ball over while Great Britain made up their deficit and took the lead off a transition play with Erin Mc Garrachan scoring (32-31) after 17 minutes.

In the meantime Niedola was having a tough time with Chiemeka guarding her or when away with Ella Clark.

In the end Great Britain were gifted the last 2 points of the quarter as Renee Busch drew a foul with 0.4 seconds left.

Great Britain stayed ahead for all of the second half thanks to some good shooting from beyond the arc and solid defending.

Great Britain continued to frustrate Niedola and thanks to some impressive three-point shooting they went into the final quarter with a 12-point advantage (60-48).

The last quarter was not pretty. Latvia pressed and forced Great Britain into a number of turnovers. With five minutes to play they trailed (56-65).

Great Britain got the break they needed with Erin Mc Garrachan getting to the basket. However it was 2 points by Busch with 90 seconds to play that put the game out of reach of Latvia. Great Britain went on to win (71-64).

Great Britain have won their first ever game in a FIBA Europe U20 Championship Women in Division A. As they lost by just a single point to the Slovak Republic they move into the next round.

Great Britain's head coach Damian Jennings explained after the game that he was satisfied with the way the game went. He had asked for defense and that was what they did. When required they hit the big shots but most importantly they kept their heads high. After the defeat on the opening day, the reaction was what he wanted as a coach and that all the players produced at the right moment.

The result was history for Great Britain youth basketball with the first victory in division A.

Italy to come back in second half to win

The Dutch were the fastest out of the starting blocks with Maxime Essenstam scoring first. Despite a quick response by Italy, the Netherlands alternated their inside play to take an early lead (9-4) with just three minutes played.

The Italians stepped up with Laura Spreafico (In picture right with Alessandra Tava) and Elena Bestagno doing the bulk of the damage as they went in front (13-12) with just under seven minutes to play.

The rest of the quarter was defensive. However the highlight came at the buzzer with Jamailah Adams from the Netherlands running the clock down while doing a slalom in the paint. She then gave the ball to Kourtney Treffers who scored (16-13).

The second quarter was a story of good defending and poor execution with the Netherlands holding on to lead (20-19) with five minutes remaining in the quarter.

Finally the fireworks started with a trey by Tessel van Dongen. The Netherlands found an extra spring in their step. One fast break later they were leading (25-19).

Italian's point guard Federica Nannucci (right) then went on the offensive and was at center of all the action. Her side finished with an 8-0 run to lead at the break (27-25).

The second half of the game was rather defensive. Unfortunately the floor became more and more slippery which hurt the Dutch players more than the Italians.

The Netherlands gave the Italian coach something to think about at the start of the third quarter as they reduced the deficit (34-38). But this was as close as they came.

The Italians hit big shots when required to comfortably beat the Netherlands (58-44). 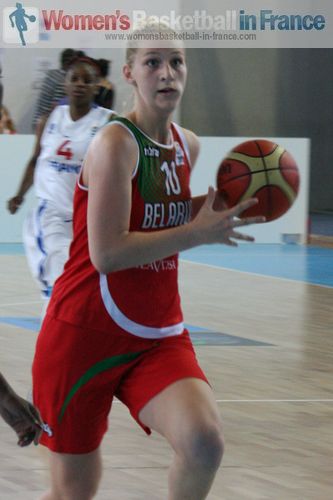