Spain play basketball with their heart

The two teams went at each other from the tip-off, no rounds of observation. It was rough and physical. But Sara Krnjic somehow managed to get through a lot of bodies for the first score of the game with 43 seconds played.

Mariona Ortiz once again opened the scoring for Spain seconds later. Then we had to wait over three minutes for the next basket.

Finally Queralt Casas (left) from Spain created space for herself along the baseline for a looping jump shot. However in the very next attack Marina Markovic replied on a fast break for Serbia (4-4).

Both sides went cold in front of the basket for the next 2 1/2 minutes. Mireia Vila from Spain thought that she had done the hard work drawing a foul but then missed the free throws.

However that action spurred Spain into action. Vega Gimeno fired in a running three-ball from her favourite spot.

On the very next attack Laura Gil forced her way into the charge zone to roll in a lay-up. Spain were not finished as Casas tipped the ball away from Milana Zivadinovic to score (11-4).

The Serbian coaching staff called a time-out to stop the bleeding.

But Spain were on a run and despite 2 points by Tijana Ajdukovic Spain won everything including a race into the advertising boards.

However they left the best for last with Gimeno firing a three just before the buzzer that rimmed out but she got the rebound to fire in a two-pointer on the buzzer (16-8).

The two-minute break did more for Serbia than Spain as they started with an extra spring in their legs.

Ajdukovic traded basket for basket with Leonor Rodriguez before Krnjic broke the sequence. Serbia's luck appeared to be changing when Rodriguez was called for an unsportsmanlike foul.

However Serbia converted just one from two of the free throws.

All the same Spain maintained a double digit lead (24-14) with six minutes to play in the second quarter.

Then they suddenly stepped on the turbo with everything working as they scored 12 unanswered points in less than two minutes to break the game open (38-16).

Serbia managed to halt the scoring but still went into the locker room trailing (20-40).

After the break Spain went into overdrive and kept Serbia scoreless while scoring 13 points to more or less end the game as a contest with 14 minutes left to play.

The home fans tried to encourage their team but Spain were in no mood to stop and went into the final quarter leading (61-24).

11 Spanish players scored to win (75-38) against a puzzled Serbian team. 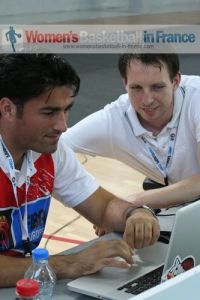