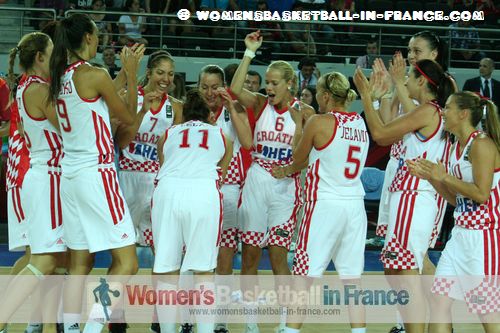 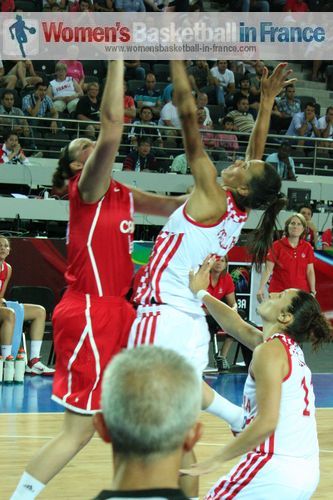 Canada were electrifying and started the game with 6 unanswered points in the first 100 seconds of the game with Teresa Gabriele, Krista Phillips (left in picture) and Courtenay Pilypaitis all hitting the target.

Croatia used an early time-out to stop the bleeding and hit their 4 points of the game through Marija Vrsaljko.

Croatia went in front for the first time with Jelena Ivezic driving in for an uncontested lay-up (12-11) with 2:32 to play in the first quarter.

A trey by Shona Thorburn put an end to the 6-0 run by Croatia to tie the game at (14-14). Both teams finished the quarter playing man to man defense. Croatia edged the quarter (17-16) after Mirna Mazic split a pair from the charity stripe.

The second quarter was less hectic and more technical. Croatia scored the first 5 points of the quarter to take control of the game.

When Natalie Achonwa from Canada, who rolled her angle against France, made a brief appearance Canada were able score their first points of the quarter.

Canada came out of the locker room fired up and outscored their opponents 9-3 during the first three minutes to make it a 1-point game (35-36).

Croatia started to lose their way on the court while Canada continued to battle away and regained the lead with an Alisha Tatham trade-mark baseline drive and lay-up (40-38). 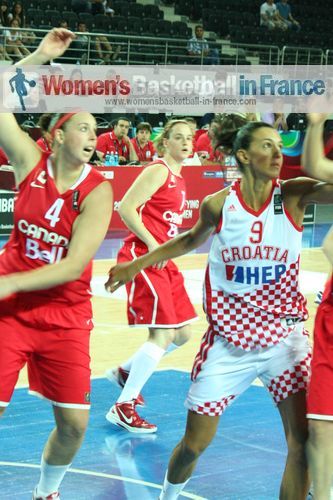 The Croatian players started to lose their focus and questioned the officials calls, while Canada continued to play hard.

The two-minute break cooled the Croatian team down and they went on a 7-0 run to regain the lead (48-46) with a three-ball from Ivezic with six minutes left to play.

Canada were very aggressive and basically bashed the Croatian players all over the court. As a result Croatia went into the last minute leading only by two points (54-52).

The end was untidy with Canada having to foul to gain time but Croatia held their nerve from the free-throw line to win (59-56).

Croatia are on their way to London while for Canada the Olympic Qualifying Tournament continues. 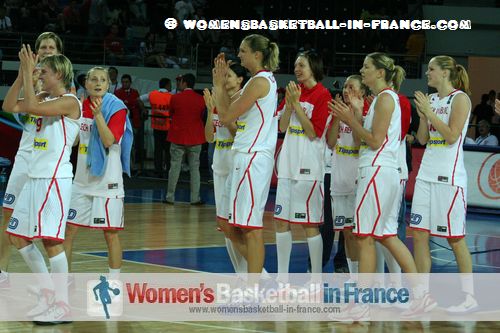 The Czech Republic were too quick for Japan at the start of the game and scored the first 13 points of the game.

Japan finally went on the score board after seven minutes to the delight of the Japanese fans with 2 points by Chie Kibayashi.

Japan played much better in the second quarter with their aggressive player to player marking system and their long distance shooting. However their lack of height was a handicap against Eva Vitecková and Kulichová.

The Czech Republic went into the locker room leading (29-18) after Kulichová tapped in the buzzer for her 10th point of the game. 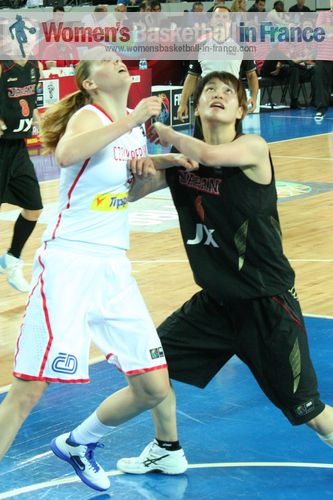 The match lost its intensity during the third quarter. Japan found a way of stopping the taller Czech girls from scoring inside. As a result the Czech Republic were forced to shoot from beyond the arc (3-of-4) to maintain their lead going into the final quarter (43-31).

Japan came to life in the final quarter as they out-hustled and out-rebounded their opponents 12-3 to reduce the deficit.

Basically Japan used their speed to pick ball after ball off the Czech Republic.

The only problem was that Japan committed too many fouls which allowed the Czech Republic free trips to the free-throw line.

As a consequence the Czech Republic were able to regain the advantage (48-43) with three minutes to play.

As in the previous quarter-final match the last minutes were played at the free-throw line with the Czech Republic winning (53-47).

For the second Olympic Qualifying Tournament in a row the Czech Republic have qualified for the Olympic Games while once again Japan will have to play in a semi-final.