The 2013 EuroCup Women
is over for the clubs from France


For the second consecutive season, the EuroCup Women semi-final will be without a club from France. From the five Russian clubs that started this competition two are still in the race for the cup while from the Turkish league there is one team left from the initial four.

France's best chance of a semi-final place was in the hands of Nantes-Rezé with a 5-point advantage from game one against MBK Ružomberok. However home advantage and 2000 supporters did not help that as they were beaten (57-79).

For Union Hainaut the task of making up 28 points against BC Vologda-Chevakata was practically mission impossible before the game even started while also being without Amanda Jackson.

In addition to Jackson's absence due to the death of her mother, Ify Ibekwe was sick.

All the same Hainaut led early on (6-2) as they tried to be adventurous.

Yet with three minutes to play in the first half, a three-ball by Katsiaryna Snytsina (19 points) put her side in the lead for good and marked the beginning of the end in this competition for the hosts. 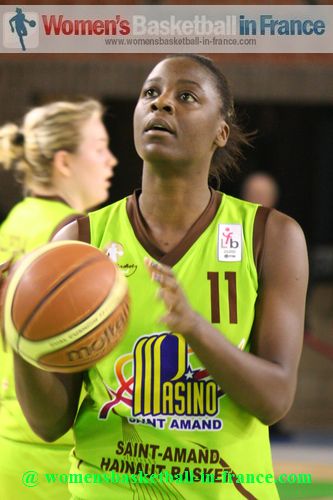 BC Vologda-Chevakata led (11-7) at the end of the first quarter and with an electrifying second quarter with 24-9 ended the contest (35-16).

The two teams just played out the second half with the Russian club winning (66-45). Glory Johnson finished with 21 points for the winners while Laura Garcia had 14 points for the hosts. But her team mate Marie-Frédérique Ayissi (in picture) was more efficient in scoring 4-of-5 for her 8 points.

The supporters of Lattes Montpellier were hoping for some magic in their EuroCup Women encounter against Dynamo Moscow due to their 22-point deficit.

Instead Dynamo Moscow went on a 19-4 run dominating the first quarter (29-13). The hosts picked themselves up during the second quarter but still trailed at the interval (39-45).

The second half was a real game of cat and mouse with both teams having their moments.

Although Montpellier could no longer win the series they tried hard to win the game. They led (82-80) with about 90 seconds to play. However it was not to be as Dynamo Moscow regained the advantage and held on to win (86-84).

Crystal Langhorne led the scoring for Dynamo Moscow with 26 points while Ana Lelas top scored for Montpellier with 19 points. 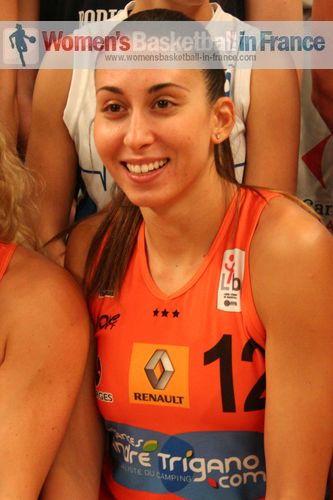 With a drive to the basket at the end of regulation time Zoi Dimitrakou (21 points - in picture) sent the game between Dynamo Kursk and Kayseri Kaskispor into overtime.

Dynamo Kursk had made up the 15-point deficit from game one and were two free throws away from booking their place in the semi-final. Yet Ekaterina Lisina missed them both and with a coast-to-coast run by Dimitrakou she tied the game on aggregate score on the buzzer.

Overtime turned into a festival of missed free throws. But Kayseri scored just enough points to take the series despite losing the match (64-77).

Dynamo Kursk won last season as number one seeds, the first team to have done so but the curse of the number seeds returned to hunt them in this series.

The quarter-final results are:

The semi-finals of the 2013 EuroCup Women are contested over two legs. The first games will be played on 7 February with the return legs scheduled for 14 February.