The 2013 EuroCup Women final is to be contested between the number 9 seeds Kayseri Kaskispor from Turkey and 10th seed Dynamo Moscow from Russia. Both teams were perfect in their semi-final series against MBK Ruzomberok and BC Vologda-Chevakata respectively.

In the all Russian affair between Dynamo Moscow and BC Vologda-Chevakata it was not until the final quarter that the 2007 EuroCup Women Champions made the decisive break to secure the series win.

BC Vologda-Chevakata, trailing by 9 points after game one, went into the final quarter leading (50-43) and trailing the series by just 2 points.

However they imploded and lost the final quarter (6-21). Just like last season, they failed twice against their Russian opponent during the semi-final play-off stage. 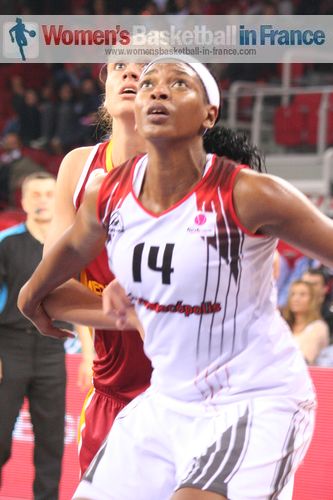 For Dynamo Moscow Kristi Toliver with a game high 28 points was the player on form. She had 9 points during the final-quarter run by her team.

In the second semi-final Kayseri Kaskispor already had a 19-point lead from game one. So the chances of road specialists MBK Ruzomberok making up the deficit were slim.

After the first half Kayseri Kaskispor put together a 21-7 run which put the game and the series out of reach for MBK Ruzomberok (56-43) with 15 minutes to play.

Asjha Jones (in picture) and Evina Maltsi led Kayseri Kaskispor with 18 points apiece as they ended MKB's unbeaten away record in this competition (73-65).

Kayseri won the series (152-125) and as higher seeds have home court advantage for game 2 of the final.

The final two games of this year's competition will be played on 7 and 14 March 2013.