Four teams punched their tickets for the 2013 EuroCup Women Eighth Finals: Dynamo Kursk, Hainaut Basket, Lattes Montpellier (BLMA) and Nantes-Rezé (NRB). On the other side of the coin Belfius Namur, BBC Sint-Katelijne-Waver and SISU Basketball cannot qualify for the next phase.

As expected Nantes-Rezé had no trouble in beating TSV Wasserburg (83-66). Once again Caroline Aubert was on form. She scored 20 points and dished out 10 assists for a double-double. 18 of her points came from behind the three-point line (6-from-9).

Lattes Montpellier blew away Satu Mare in the first quarter (34-7) and then paced themselves the rest of the way to a comfortable victory (84-41).

Five players finished in double digits with Géraldine Robert as the top scorer with 18 points. Fatimatou Sacko had a double-double of 13 points and 10 rebounds while Ana Cata-Chitiga also scored 13 points.

Emilie Gomis (5 assists) and Edwige Lawson-Wade had 10 points each. 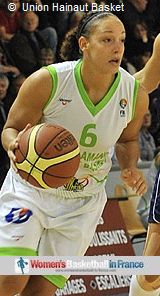 Amanda Jackson (in picture) marked her return to Hainaut Basket with a game high 20 points and 5 steals in their victory against TED Ankara. Jackson was quickly into her stride scoring with her first two shots of the game.

Hainaut Basket did not have it all their way in the first half (44-39) with Mercedes Walker scoring 16 points but also fouling 3 time.

During the third quarter Hainaut Basket took full advantage of the foul problems of TED to blow the game open and then cruise to victory (82-66). Hainaut Basket are guaranteed first place in Group B so they can now concentrate on improving their seedings for the knock-out phase.

The holders of the EuroCup Women, Dynamo Kursk have also qualified for the next phase after seeing off Adana Botas (86-62). The Russian team has an all-star cast with Michelle Snow, Ausra Bimbaite (22 points), Temeka Johnson (4 assists), Eshaya "Shay" Murphy (18 points), and
Epiphanny Prince (17 points).

What else happened during EuroCup Women round 4 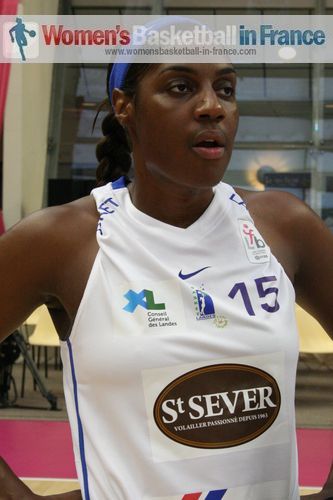 Basket Landes kept their hopes alive of qualifying for the second phase after seeing off Partizan Galenika (86-72) for their second victory. Jennifer Humphrey (in picture) was back to her best with 17 points with 7-of-8 shots while picking up 8 rebounds.

Tarbes suffered their first defeat in this competition with a loss at home to Turkish club side Mersin (71-77).

Despite the defeat Tarbes still have the advantage over Mersin on the aggregate score over the two games. A victory in the remaining two games should see them qualify. Yet both teams still need to take care because Spartak Noginsk has a chance of qualifying after having eliminated Belfius Namur from the competition (77-59).

The other teams close to qualifying for the knock-out stage are as follows:

From Group A, BC Chevakata should qualify as long as they win one more game or Satu Mare drop a game.

In Group D Dynamo-GUVD are in a similar position to BC Chevakata. They just need to win one of their remaining games to qualify after eliminating BBC Sint-Katelijne-Waver (70-41).

ECW results from round 4