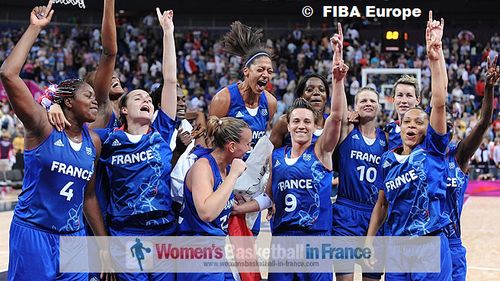 Playing basketball at the Olympic Games is already a dream come true for the 12 players representing France. But now France have a chance to reach even for Gold.

On the 9 August 2012 "les Bleues" beat Russia (84-61) in the semi-final of the London Olympic Basketball Tournament to qualify for the final in the Olympic Games.

After this victory France face the defending Champions, the USA, who beat Australia in the other semi-final (86-73). 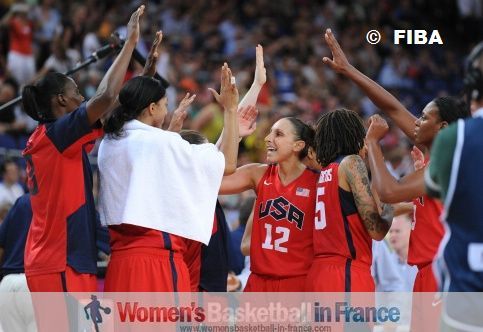 The USA have won the last four Olympic basketball tournaments and are on a 40-game winning streak.

However at the interval in their semi-final Australia led the USA (47-43) with Liz Cambage scoring 19 points.

Sue Bird was keeping the USA in the contest with 10 points.

After the break a couple of three pointers by Diana Taurasi got the USA going. But it was not until Lindsay Whalen with 6 unanswered points (61-56) put USA in the lead for good in the last 90 seconds of the third quarter.

Although Australia hit some impressive three pointers to stay on the tail of their opponents, Cambage's exhaustion and failure to score a single point during the last 20 minutes handicapped the team.

Geno Auriemma, the USA coach, was able to rotate his players without anybody having to play 30 minutes for the team to hold on to win.

Taurasi and Tina Charles (10 rebounds) led the way with 14 points while Bird finished with 13 points.

For Australia Cambage finished as top scorer with 19 points while Lauren Jackson and Kristi Harrower finished with 14 and 12 points apiece. 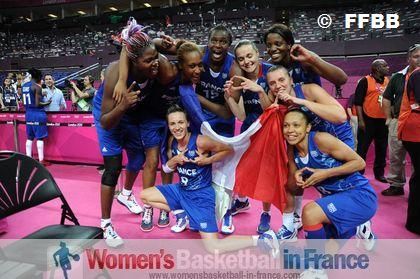 For the head coach Pierre Vincent to shed tears after the match showed the pressure he has been under since the end of 2007 when he started the project of qualifying France in 2008 for the Olympic Games.

France never trailed in this game and had the best start possible, leading (10-1) with just over three minutes played.

France did not miss much during the first quarter. With Edwige Lawson-Wade banking in a three pointer just before the quarter-ending buzzer (24-15) France were on their way.

France's advantage grew (29-15) before Russia woke up. As expected the Russian outside shooters started the assault with Becky Hammon and Elena Danilochkina doing most of the scoring.

So Russia's deficit was down to 7 points and France headed to the locker room (38-31).

France continued their run from the front. However 8 points by Marina Kuzina brought the Russians right back into the game (50-53) with 90 seconds to play in the third quarter. 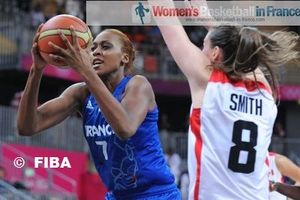 Sandrine Gruda (in picture) then gave everybody a reminder of her skills with her spin move in the paint to score and get fouled. Then she also hit the free throw. Céline Dumerc brought the quarter to an end with a three-pointer on the buzzer (59-51).

With Gruda picking up rebounds, Emméline Ndongue making interceptions and Isabelle Yacoubou-Dehoui causing mayhem all over the court, Russia collapsed. So France had a free run to the final buzzer (84-61).

France will continue playing basketball at the London Olympic Basketball Tournament in the Gold medal match against the USA.