The London Olympic Basketball Tournament ended its stay at the Olympic Park Basketball Arena in style with France edging out the Czech Republic (71-68).

Earlier in the day the USA walked over Canada (91-48) while Australia eliminated China (75-60). Then Russia scraped through against Turkey (66-63).

The rest of the tournament will be held in the bigger O2 Arena while the Olympic Park basketball arena will be dismantled and shipped to Rio de Janeiro for the 2016 Olympic Games.

In the first quarter-final of the Olympic Women's basketball tournament (OLYW) the USA had an easy game against Canada. Leading (42-21) at half time the Americans put the game out of their opponents' reach with a 16-0 run late in the third quarter (66-28). 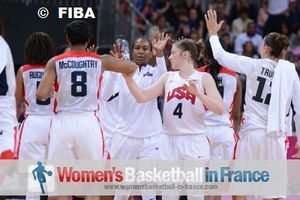 Candace Parker added a 12 points and picked up 7 rebounds as the USA cruised to victory (91-48). The USA have won the last four Olympic tournaments and are hoping to win again.

"For the first time in the tournament, we got off to a great start and imposed our pace on them. Canada are a tough team, they like to run their offense and make you work. We made them work today."

Australia are the semi-final opponents of the USA after beating China (75-60) in another up and down performance.

China went into the locker room leading (36-35) and were still in front on the 27-minute mark (50-47). The Australians were forced to switch gears and then went on a 9-0 run to take command of the game for good.

Liz Cambage led the Australian attack with 17 points while Lauren Jackson entered the Olympic record books as the top scorer in women's basketball with 536 points after adding 12 points in this game. 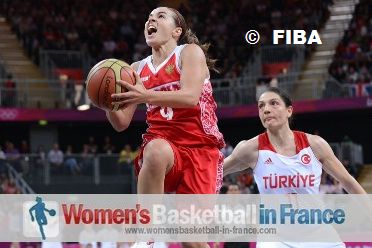 It is hard to say what Russia would do without Becky Hammon. She led the Russian side scoring 19 points. But most importantly it was her drive to the basket with 13 seconds left to play that put Russia in the lead for good. Hammon also dished out 5 assists and had no turnovers in 33 minutes on the court.

Hammon said after the game: "We hung in there and we stuck it out. They're physical so we had to fight through that, "In the second half it was just a battle.

They started double-teaming me late in the first half but we really hurt them when they did that in the second half because we got a rotation over the ball game and then we went right down on the block and got a couple of easy buckets. So we attacked that pretty well and didn't get many turnovers out of it."

For the Turkish players the London Olympic Basketball Tournament was the first time that any of them had played in a major event outside of EuroBasket. Their head coach, Ceyhun Yildizoglu said that Russia's experience and ability to capitalise on their errors led to their victory.

The London Olympic basketball tournament's semi-final will be played at the O2 Arena and the match-ups are as as follows: 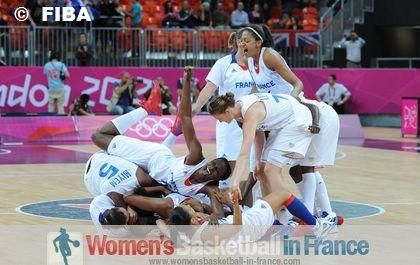 France have qualified for the semi-final of the London Olympic Basketball Tournament which is the first time in Olympic Game history for women's basketball.

They achieved this by overcoming the Czech Republic in a match full of twists and turns.

For the Czech Republic Jana Veselá was on fire during the first 20 minutes. Yet it was the performance of her team-mate Eva Vitecková during the third quarter with 13 points that almost won the game for them.

Also Ilona Burgrová gave her former Bourges team mates a hard time while Katerina Elhotova was fearless as the Czech Republic went all out to end the participation of France in the London Olympic Basketball Tournament. 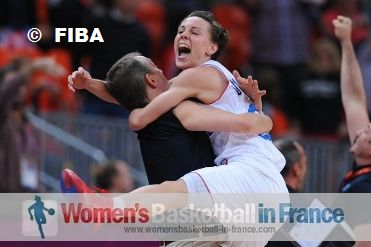 However France have Céline Dumerc who is on fire at the moment. She had a game high 23 points and dished out 5 assists in the victory for her side.

France started well and raced out to lead (16-7) after eight minutes.

After a time-out from the Czech Republic things changed while for France the pendulum swung in the other direction.

With Veselá on top of her game and an inspired Burgrová the Czech Republic led (28-23) with 50 seconds left to play in the quarter.

Pierre Vincent used a time-out to calm things down for France. Dumerc then scored before Emilie Gomis with a baseline trey levelled the score (28-28) with the last shot of the quarter.

After the break it was the turn of Vitecková who did not score during the first 20 minutes to cause mayhem. With her 13 points and Burgrová's efforts the Czech Republic led (51-38) with 28 minutes played.

Once again Dumerc responded for France to make it a 10-point game going into the final quarter (41-51).

The last quarter did not start well for France with Elodie Godin having to leave the game after pulling a muscle in her back. The Czech Republic were holding on to their double-digit lead (55-44).

However the duo of Nwal-Endéné Miyem and Isabelle Yacoubou-Dehoui took the scoring pressure off Dumerc.

The game went back and fourth with France eventually regaining the lead with just under four minutes to play (63-62).

However the suspense continued with Burgrová putting the Czech Republic back in front with two minutes remaining.

Dumerc came to the rescue with another big three-pointer before Miyem settled the game by picking up an offensive rebound off a missed three-point by Edwige Lawson-Wade and scoring with 25 seconds left on the game clock.

The match then finished on a series of free throws.