The first day of action at the London Olympic basketball tournament went well for France with a victory against Brazil (73-58). Céline Dumerc was the only French player in double digits with 23 points while also dishing out 5 assists. She was as well credited with 4 steals.

In the other matches played from Group B, Russia and Australia came out on top against Canada and Great Britain respectively.

Russia were made to work hard for their victory, trailing (40-50) with six minutes to play. They fought back starting with 5 points from Anna Petrakova quickly followed by a trey from Alena Danilochkina.

Becky Hammon then finished the comeback with 8 points in a row to see the Russian side home and dry. Kim Smith from Canada was the leading scorer in the game with 20 points.

In the final game of day 1 Australia were forced to battle against a tough Great Britain defense before coming away with the victory (74-58). Lauren Jackson from Australia won the scoring honours with 18 points. Jo Leedham and Rachael Vanderwal had 11 points each for Great Britain.

In Group A the USA opened with a victory (81-56) against Croatia.

The USA are the favourites to win the London Olympic basketball and despite starting with a victory, they had to wait until the final quarter with a 16-0 run to blow away their opponents.

China also had a perfect start with a good victory (66-57) against the Czech Republic while Turkey eased past Angola (72-50).

A good start for France 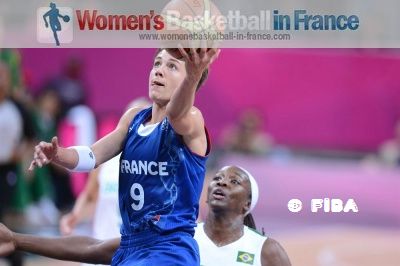 Céline Dumerc (in picture) did not want to speak about her performance in the game but explained that she wanted to enjoy the London Olympic Basketball tournament because this was her first and possibly last participation at the Olympic Games.

Pierre Vincent had to wait until late in the third quarter before his team finally found a way to break the Brazilian resistance. He explained after the match that his players were disciplined and understood their roles within the team. When things were not going well, they would battle for each other to find a solution and when they did things well it could be very good. 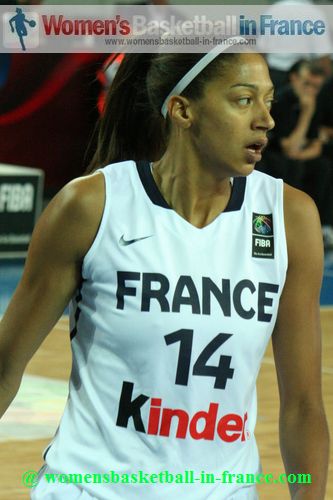 Emméline Ndongue (in picture) spoke a little about the match explaining that the force of the French team was that it was a team of 12 players and that no matter what rotation the output on the court was the same. The objective against Brazil was to tire them out.

She added that she did not do a good job on Erika Souza during the first half and as a whole the team was not physical enough. But fortunately this was corrected during the second half

The importance of the preliminary round is for teams to win enough matches to make sure that they qualify for the quarter-final.

While Dumerc had her best scoring game ever for France it was Emilie Gomis uncertain for participation in the Olympic Games who scored 6 of the first 8 points for their side.

For Brazil Erika Souza and Karla Costa were the main scorers during the first half while Adriana Pinto caused mayhem. France had troubles keeping hold of the ball and committed 11 turnovers during the first 20 minutes but still managed to go into the locker room on level terms (34-34).

The teams were still locked together (47-47) 27 minutes into the game.

Marion Laborde broke the deadlock with a three-pointer shot that bounded in off the backboard to put France in the lead for good.

With Sandrine Gruda having a quiet day and Isabelle Yacoubou-Dehoui limping off, it was Elodie Godin who took control of the defensive rebounds in the closing stages.

The only players not to score for France were Florence Lepron and Jennifer Digbeu who happened to be the only players that played less than ten minutes.