Greece get the victory that counts

Greece had lost to Finland (46-58) during the qualification round. So the expectation was that the game was going to be close.

The first ten minutes lived up to expectation with Greece edging the quarter (16-15). 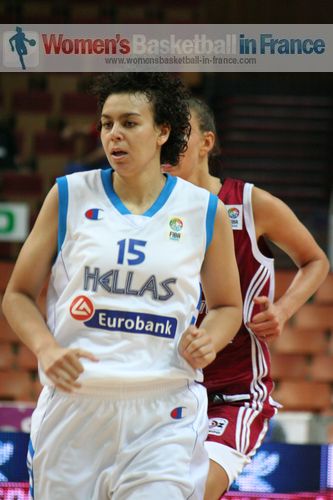 However in the second quarter Artemis Spanou (right) went on the rampage for Greece, basically playing all five positions as her team blew Finland away during the second quarter 22-7. They went into the locker room with a double-digit advantage (38-22).

Annika Holopainen who finished the game with 20 points for the "Wolves" tried her best to lift her team-mates but with Spanou driving for Greece it was a losing cause.

Greece paced themselves all the way to the finish to win (67-45) and handed Finland their first lost of the tournament.

Spanou finished with 26 points, 14 rebounds, 2 assists and 3 steals for her day's work. Anastasia Slouka was also very productive with 16 points and 5 assists. For Finland Evita Iiskola backed up Holopainen with 12 points.

The rest of the news

In the 13th place classification group Austria beat Switzerland (68-43) while England beat Luxembourg (83-71). A victory for England on the final day against Switzerland secure 13th place.