Finland won the Nordic derby against Denmark (82-61) with 24 points coming from Evita Iiskola. Once Finland took the lead after three minutes they put themselves in control for good with a 16-0 run in the first quarter (20-5).

Denmark never threatened again despite reducing the deficit to 7 points early in the second quarter.

Israel were given a rough ride by Luxembourg (84-71). During the first quarter the concept of defense did not exist with Israel coming out on top (33-23). However neither side was able to keep up the pace for the rest of the game.

Lenna Hetto was the leading scorer for Luxembourg with 27 points while Hadar Levi and Chen Weisbort shared the scoring with 14 points apiece for Israel.

Israel and Finland are through to the next round while Denmark and Luxembourg face each other in a winner-take-all match to determine which is the third team to go through. 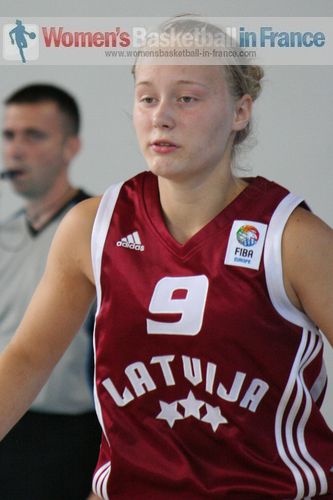 Latvia needed a win after losing in overtime to Greece on day 1 to get their competition started.

Latvia had Asnate Fomina (left) showing some of the skill displayed during the FIBA Europe U20 European Championship for Women Division A earlier in the summer. Her side was never in trouble once they took the lead for good eight minutes into the game.

Renate Reine led the way with 13 points while Fomina had 10 points. For Norway Stine Austgulen also had 13 points.

They dominated the first quarter and opened (13-2) to finish with a (20-8) lead. The second and third quarter was just a festival in the art of missing by both teams. Although it could be argued that they played good defense.

Artemis Spanou did most of the scoring for Greece during the two quarters giving her team a (38-26) lead going into the final quarter.

Spanou finished with 16 points and did not play in the final quarter. Anthoula Chatzigiakoumi was the only other player in double digits with 12 points.

Greece are the only team in Group D so far to qualify for the next phase.