Romania are in trouble but not eliminated from Group E

Romania, the hosts of the FIBA Europe Global Vision U18 European Championship Women, lost for the fourth straight game, this time against Slovenia (53-57) but are not eliminated.

The situation in Group E is as follows:

Romania are eliminated if they lose to Poland. Slovenia must then beat Turkey by a big enough margin to give them an advantage in a three-way tie with Poland and Turkey.

In the case of Slovenia losing to Turkey then they are eliminated. Romania must then beat Poland by a sufficient margin to win the three-way tie against Poland and Slovenia.

Romania have the advantage of playing last so they know what they need to do to qualify if Slovenia lose. 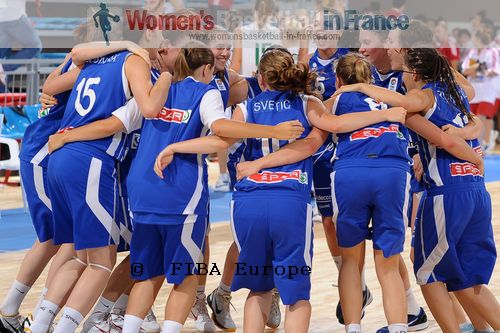 Slovenia went on a 9-1 run towards the end of the second period to go ahead (37-31) at the interval. They then stayed in front all the way to the end. Rebeka Abramovic was the leading scorer with 15 points while Alina Gjerkes (9 rebounds) contributed 12 points.

For Romania Sonia Ursu had a double-double of 18 points and 11 rebounds.

Poland's legs were heavy after their overtime defeat to Turkey from the previous day and they were powerless to stop Sweden from crushing them (39-75).

Josefin Vesterberg was the leading scorer with 21 points for the Scandinavians.

Spain have been finally given a game at the 2011 FIBA Europe Global Vision U18 Championship with Turkey pushing them all the way.

Spain looked home and dry with a (44-28) half-time lead. However Turkey fought tooth and nail during the second half of the match.

Spain ended up winning (69-57) with Astou Ndour scoring 18 points and picking up 11 rebounds. For Turkey it was the turn of Ayse Cora to lead the attack with 19 points.