Playing basketball in the
Challenge Round is hard on coaches

Playing basketball in the LFB Challenge Round has been rewarding for Basket Landes in two ways: first they have achieved the season's objective of qualifying for the EuroCup Women by reaching the Challenge Round final.

Secondly they will face Tarbes in a derby atmosphere during the final of the best-of-three series for the Challenge Round trophy.

Basket Landes will host Tarbes for the first time this season on their own court as their first meeting of the season was at the Open LFB which counted as a home game for Basket Landes. 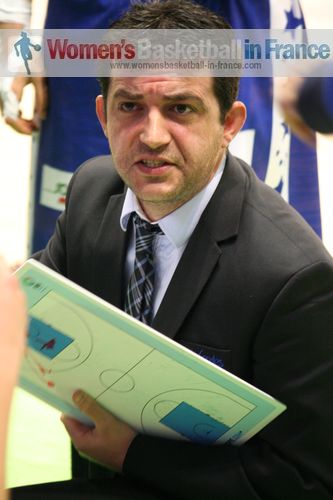 Olivier Lafargue (in picture), the head coach of Basket Landes, went through all the emotions from despair to joy and happiness during the last 36 seconds of game 3.

His side were trailing (60-62) and his season was coming to an end when the match was turned upside down.

Isis Arrondo was called for an unsportsmanlike foul which allowed Kamila Stepanova to tie the match at the free-throw line. Stepanova's next action was to deliver a perfect pass to Jennifer Humphrey under the basket who scored with Basket Landes going in front.

The last 19 seconds were played at the free-throw line with Carmen Guzman staying as cool as ice for Basket Landes to hold on to win (69-67).

Emmanuel Coeuret, the coach from Nantes-Rezé, was furious after the match because of the way the officials made some calls down the stretch. His captain Caroline Aubert was also in tears. However the season is not over for Nantes as they will be playing basketball once more during the final of the French Cup in May.

Below are the score sheets for the three-game series: