2012 FIBA Europe
U18 European Championship
Promotion for Belarus and England


The FIBA Europe U18 European Championship Women Division B in Strumica final will be between Belarus and England. Belarus are unbeaten and beat England on the opening day of this championship.

England defeated Portugal (78-71) to qualify while ending the title dreams of Hungary (67-63). 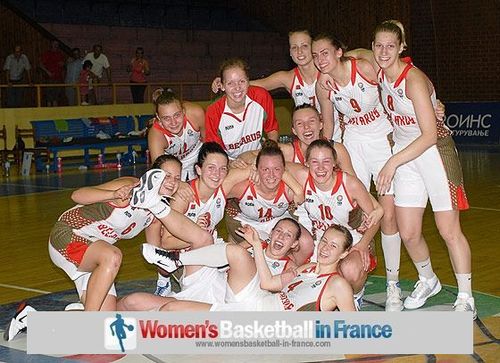 In the second semi-final Belarus were down (58-61) against Hungary with less than two minutes to play. But a 9-0 run enabled them to remain unbeaten and qualify for the final (67-63).

Maryia Papova's 14 points and 13 rebounds won her the player-of-the-match award for Belarus.

In the first semi-final Portugal had a great start and won the first quarter (23-12).

England came back in the second quarter and led briefly (31-30) after a three-pointer by Jay-Ann Bravo-Harriott on the 15-minute mark.

Portugal were able to wrestle back control and went in the locker room leading (37-34).

The second half of the match was more intense. With just under three minutes to play Cheridene Green (18 points and 18 rebounds) from England tied the game (68-68) with a split pair from the free-throw line.

Janice Monakana put England in the lead for good with just under two minutes to play. The English players remained cool from the free-throw line the rest of way.

The winner between Hungary and Portugal in the bronze medal match will win the third promotion place.

Denmark handed Germany their third straight defeat (78-71) and will play in the fifth place match. Their opponents will be Bulgaria who beat Lithuania (82-66).

In the classification groups for the 9th-18th place, Austria and Latvia won their respective matches to play off for 9th place.

Austria who are having their best ever U18 Championship beat Norway (75-51) to claim the Group G title.

Latvia with a comfortable win (97-59) against Montenegro and Ukraine with a win against Macedonia (72-62) claim the top two places in Group H.

Switzerland ended their competition with a victory against Scotland.