Sweden scored the first 6 points of the match against Greece and dominated the first quarter (20-8). With Gabby Hanson on fire during the first 20 minutes Sweden were able to take a 20-point lead into the locker room (45-25).

Greece fought back during the second half. But with 11 points coming from Regan Magarity in the final quarter, Greece had no chance.

Belgium blew past Russia (51-36) to book their place in the quarter-final of the FIBA Europe U16 championship. They never trailed in this match. Hind Ben Abdelkade was the only player in double digits for Belgium with 24 points.

The Czech Republic had to dig deep in the final quarter to get past the Slovak Repulic (70-60). The two teams were level (47-47) with seven minutes to play.

Kamila Hoskova was the leading scorer for the winners while Terézia Páleníková had 17 points for the Slovak Republic.

If the Czech Republic do not beat Belgium in the final group match then the winner in the match between Greece and the Slovak Republic may qualify for the quarter-final.

Italy in the last 8 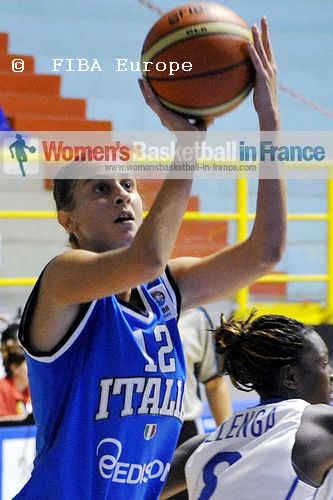 Italy are keeping the home fans happy at the FIBA Europe youth international basketball festival in Cagliari. They beat previously unbeaten Turkey (67-49) on the back of 22 points, 3 assists and 3 steals by Elisa Penna (left).

Italy pulled away late in the first quarter to open up a 7-point lead (22-15) going into the second quarter.

The second quarter was not pretty with neither side doing anything offensively with just 13 points scored between them.

Italy remained focused during the third quarter and went into the final quarter with a lead of 9 points (48-39).

Leading by 11 points with four minutes to play, Turkey gave up leaving Italy free to score 11 unanswered points to close the game on a 11-2 run.

Italy are the third team to qualify from this group.

The Netherlands are at the U17 FIBA World Championship for Women next year because they are hosting the tournament so the stakes in the competition is different for them.

They needed a big win over Hungary in order to have a chance of qualifying for the quarter-final. They beat Hungary (60-37) with Merlin Lammerink leading the way with 15 points.