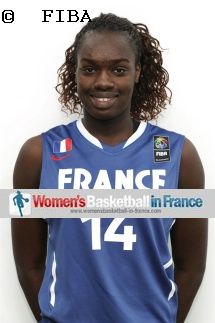 Anybody reading the statistic notices that both teams turned the ball over 19 times and shot under 40%.

However this game was a U16 youth international basketball match at its best. The game was tied on 12 occasions while the lead changed hand 12 times. Mousdandy Djaldi-Tabdi (right) for France managed just seven minutes play time before fouling out.

The match continued in the same way all through the final quarter. Unfortunately for Turkey the injury to Sehernaz Cidal was such that she could not finish the game.

With the teams tied (57-57) with about 30 seconds to play Büsra Akbas was open on the wing and fired in her first and only trey of the match (60-57) which turned out be the game winning shot.

She had missed her six previous attempts.

France still had time to come back but Clémentine Morateur's three-ball failed to drop. The last 20 seconds were typical for players of this age, turnovers, missed free throws and players diving all over the place.

Aby Gaye did score for France but it was not enough for the victory.

Büsra Akbas led the way for Turkey with 13 points while Hülya Coklar had a double double of 12 points and 12 rebounds.

In the other game from Group D, the Netherlands beat Serbia (68-61). The Netherlands had the better start leading (22-13) by the end of the first quarter.

Serbia came back slowly and with two minutes to play they trailed by just 3 points points (61-64).

However a three-ball by Lisanne de Jonge in the closing seconds put the Dutch back on track. De Jonge finished the game with 17 points while Sanja Mandic scored 29 points for Serbia.

What else happened on day 1 in Cagliari

We have seen it all summer in the FIBA Europe youth events, Spain thumping opponents with a simple press. Spain beat the hosts Italy (87-27) in a flawless display. Everybody from Spain scored with Marina Lizarazu scoring the most with 14 points.

Also in Group C Hungary got past Finland in a scrappy encounter (57-42) with 15 points coming from Fanni Bodnar.

Russia went on to win (51-39) with Polina Fedorova leading the way with 12 points. Kamila Hoskova was the top scorer for the Czech Republic with 17 points.

Greece got the start they wanted with a (68-56) victory against Croatia. Anna Stamolamprou led the way for the Greeks with 19 points while Antonija Chiabov compiled a double-double of 22 points and 11 rebounds for Croatia.

In Group A, Sweden got by Belgium in a scrappy affair. The shooting was not very good and yet both teams hit some spectacular shots from beyond the arc. Sweden always had the advantage once they edged the first quarter (14-7). Belgium used a lot of energy in chasing after the score. Each time they clawed their way back, Sweden would take off again.

In the final quarter Sweden used a 10-0 run to put Belgium away for good and ended up winning (56-49) with Gabriella Hanson leading the way with 15 points. For Belgium Hind Ben Abdelkader was the top scorer with 15 points.

The Slovak Republic used a 10-0 run in the final quarter to put Poland down. Poland scored just 1 point during the last 10 minutes as they fell (41-58).