Hard luck for the Netherlands

The Netherlands beat Italy (57-52) in the final group but are still out of the race for the title due to their defeat to France in the preliminary round.

The Netherlands put Italy on the back foot early in the first quarter with a three-point shooting blitz. Klaziena Guijt hit three times while Laura Cornelius (left) connected once as they went on a 14-0 run.

The Netherlands finished the first quarter leading (25-11) and stayed in front all the way till the end.

The Italians made it a 1-point game (50-51) with four minutes to play. However 5 points by Merlin Lammerink put the Dutch back in charge.

Guijt led the scoring with 18 points while Lammerink scored 14 points and picked up 8 rebounds. Cornelius finished with 8 points and 2 assists.

For Italy Cecilia Zandalasini was the leading scorer with 18 points while Anna Djedjemel was the only other player in double digits with 12 points. 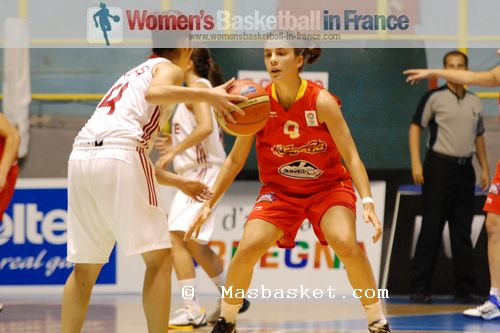 Spain were back to their dominating best as they crushed Turkey (83-35) with all 12 players scoring.

It was not perfect basketball with 24 turnovers. But then it was difficult to concentrate with a (44-16) advantage at the interval. However with 16 assists and 17 steals and with nobody playing less than 12 minutes and more than 25 minutes it was a total team effort.

The top four from this group in finishing order are: Spain, Italy, Turkey, France. 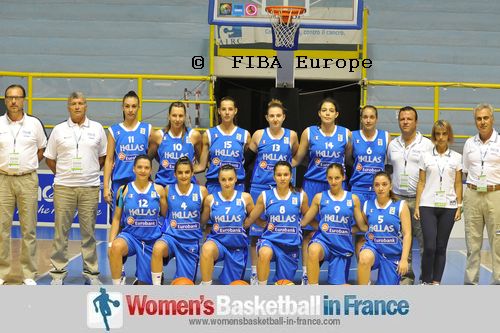 Greece had beaten the Czech Republic on the opening day. So all they needed to do was beat the Slovak Republic to qualify for the FIBA Europe U16 European Championship quarter-final.

On the other side the Slovak Republic could also qualify provided that they win against Greece by a big margin.

So the scene was set for an extraordinary match which was won by Greece (76-69). For Greece Anna Stamolamprou (left) fired in 31 points while for the Slovak Republic Zofia Hruscáková scored 32 points.

It was a game that neither side really controlled during the first 29 minutes (54-54).

Greece got a lucky break with an AND-1 call for Dimitra Tsavou for her side to take the lead. This sparked her team into a late flurry of scoring to close the quarter leading (60-54).

The Slovak Republic failed in making up the deficit during the final quarter despite 12 points coming from Hruscáková.

With two minutes left to play the Slovak Republic coach knew that his side could not qualify and withdrew Hruscáková from the game.

Belgium beat the Czech Republic (75-59) behind a strong second-half performance.

The Czech Republic went into the locker room with a slender lead (37-36) but then fell apart.

Hind Ben Abdelkader continues to lead Belgium offensively with 22 points but received a lot of help from An-Katrien Nauwelaers with 15 points.

While Belgium was defeating the Czech Republic, Russia beat Sweden (62-56), a result that sends Belgium to the top of the group.

Russia never really allowed Sweden a chance in the game and went into the final quarter (56-38) in front.

Sweden went on a scoring spree in the final quarter with Regan Magarity (right) doing most of the damage. But Russia always appeared to have control.

Ekaterina Tsukanova led the Russians with 17 points while Magarity scored 17 points and collected 11 rebounds for Sweden.

The quarter final pairings are as follows:

Belgium vs. France
Spain vs. Greece
Sweden vs. Turkey
Italy vs. Russia

The winners of the quarter-final matches automatically qualify for the 2012 U17 World Championships. 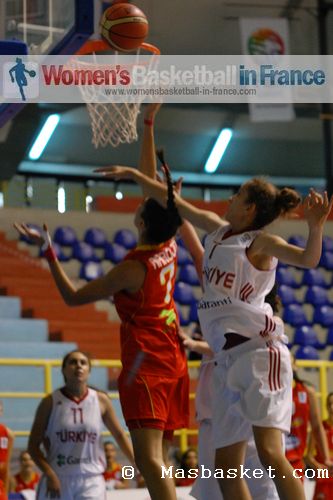