Italy ended the tournament in the best way possible with a victory against Turkey (82-48) in front of a large crowd in the Pala Rockefeller Arena in Cagliari.

The match was close for just five minutes with the guests leading (7-6).

A three-ball by Cecilia Zandalasini from Italy started the ball rolling for Italy, who then outscored Turkey 15-4 to edge the first quarter (21-11).

The second quarter turned into a Elisa Penna show with 13 quarter points as her team ran all over Turkey with a 25-11 blitz to go into the locker room with a huge advantage (46-22).

During the third quarter it was the turn of Antonia Peresson from Italy to take over the offensive duties with 13 points.

Büsra Akbas (14 points) and Hülya Coklar (10 points), Turkey's two top players did their best. But with a (32-67) deficit going into the final quarter they knew that the bronze medal was gone.

All the Italian players got to play as they strolled to victory. Penna, Zandalasini shared the scoring for 18 points each while Peresson contributed 16 points. Italy hit more than 50% of their shots.

Greece go to the U17 World Championship - Poland relegated 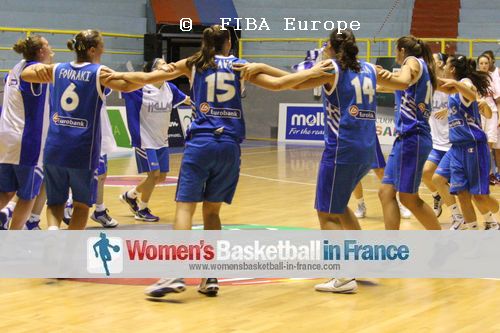 At EuroBasket Women 2009, Greece had to battle to claim fifth place which enabled them to qualify for the 2010 World Championship. They beat Italy that day and Evanthía Máltsi led her team into a Greek traditional dance.

The Greek U16 players in Italy held off Russia (71-65) in the fifth place match which was also the play-off for the fifth European place for the 2012 U17 World Championship. 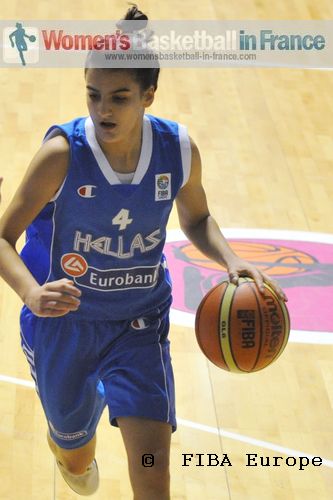 Anna Stamolamprou (in picture) who led her team to victory with 31 points got her team-mates to dance.

The match itself was keenly contested and both teams played some excellent basketball at times.

Russia have had problems with turnovers this year and this game was no exception. They had 10 more than Greece but their main problem was that they only had Yana Degtyarskaya who was able to raise her game. She scored 19 points and dished out 4 assists. She also led the rebounding and steals but their was nobody else.

For Greece Stamo Lamprou has been a one-lady wrecking machine but her side was able to to get players to step up and help.

Dimitra Tsavo has been regular and scored 11 points and picked up 10 rebounds while Eleni Kyratzi had another double-digit game with 13 points. Yet it was the turn of Vasiliki Fouraki with 11 points to step up.

France huffed and puffed but never got going after their opening day defeat to Turkey. All the same they managed to beat Sweden (47-38) to claim 7th place in a match that nobody should want to remember.

Lysa Millavet was the leading scorer for France with 12 points.

The Netherlands are a team that likes to entertain even when things are not going well for them.

They wanted the 9th place more than the Czech Republic. They were trailing (47-49) with just over two minutes left to play. Then Netherlands started to defend as if the title was at stake while hitting on fast breaks. The result was that they finished the game scoring the last 9 points to win (56-49).

Poland join Finland in division B after losing to Croatia (65-78) while Serbia beat Finland in the first game of the day (72-58). 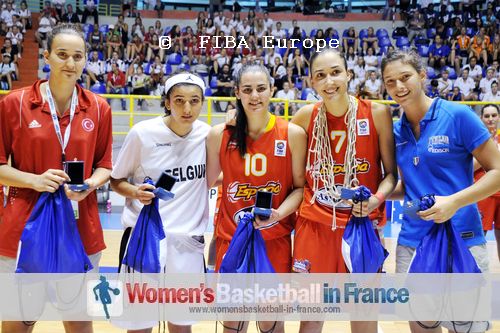 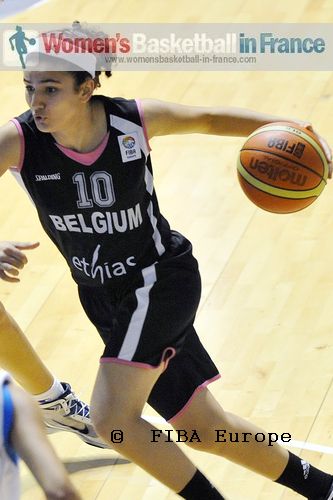 Hind Ben Abdelkader (left) is not a new face to youth international basketball. She played for Belgium last year (2010) at the U16 European Championship and was also a member of the Belgium U17 team that finished fourth at the 2010 U17 FIBA World Championship for Women.

She has added the MVP title to her growing list of accolades. Abdelkader finished the tournament with an average of 18.9 points and dished out 3.3 assists per game.

However it was during the semi-final in which she scored 29 of her team's 54 points where she proved to be a match winner and leader. She is following in the foot steps of fellow national team mate Emma Meesseman who was the MVP in 2009 in the U16 category.

The other members of the all-tournament team are: Hülya Coklar (Turkey), Cecilia Zandalasin (Italy) and from Spain María Arrojo and Leticia Romero.