Bourges Basket failed in their attempt to reach the 2013 EuroLeague Women final in Ekaterinburg with a semi-final defeat to the hosts UMMC Ekaterinburg (44-73).

Bourges Basket were on the back foot before the match even started with the withdrawal of Nwal-Endéné Miyem due to back problems. Miyem had been the team's leading scorer in the Final 8 with 42 points coming into this game.

Despite the initial handicap Bourges scored the first 9 points of the game with 5 points coming from Marissa Coleman (13 points) and 2 points apiece by Jo Leedham and Céline Dumerc.

UMMC finally got on the score sheet after five minutes played with a driving lay-up by Diana Taurasi. 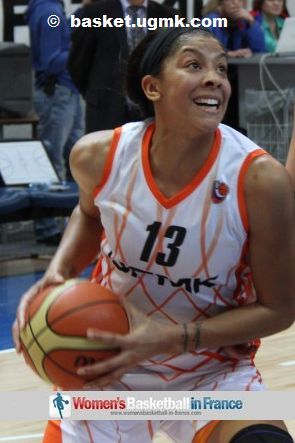 Candace Parker (in picture) scored 6 points in an 11-0 run by the hosts for her side to briefly go ahead.

The lead was to change hands four times during the last two minutes of the first quarter with Bourges having the lead (18-16).

Bourges were having problems offensively but with good defending remained on level terms (25-25) after 17 minutes.

However the last three minutes of the second quarter belonged to the hosts who finished with a 9-0 run to lead (34-24).

UMMC scored the first 9 points of the third quarter and then the contest was over. The trio of Parker (24 points, 14 rebounds), Taurasi (16 points, 5 assists) and Anete Jēkabsone-Žogota (11points) did most of the scoring during the 18-0 run.

Bourges could do nothing to stop UMMC for the rest of the third quarter and were trailing (33-56) going into the fourth quarter.

UMMC took the foot off the gas during the last ten minutes as they strolled to victory (73-44).

This victory gave UMMC its first EuroLeague Women semi-final victory since 2003 when they had won this competition for the only time in their history.

For UMMC the only concern is the ankle of Ewelina Kobryn who had left the game after a minute after rolling her ankle to never return.

You may watch game highlights and post-match comments below: 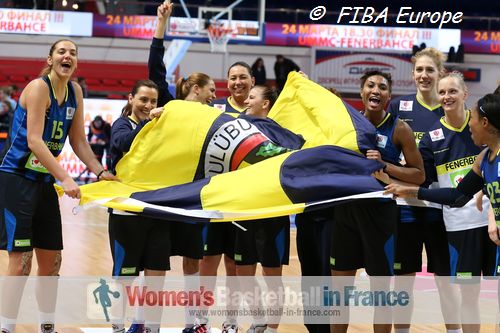 Fenerbahçe SK huffed and puffed for almost 28 minutes against Good Angels Kosice (45-45) before taking command of the game with a 6-0 run to finish the third quarter (51-45).

The Fenerbahçe SK machine which started the match slowly went into overdrive and once Angel McCoughtry (17 points, 14 rebounds) caught fire it was over for Good Angels.

Plenette Pierson had 23 points for Good Angels but with only Petra Kulichová (10 points, 13 rebounds) helping out on the offensive end they lacked the fire power.

You can listen to some after-match comments by Pierson, Pondexter and Ivana Matovic below: