The LFB regular season objective for Lyon BF is a place in the top 4 so that they can challenge for the French Championship during the post season.

By beating Basket Landes (69-63) the have given themselves a two-game lead against one of their closest rivals. With Tarbes not playing until 5 March, Lyon are back in 4th place alone.

The game was only close during the first quarter in which Lyon played to their strength scoring 14 of their 19 points in the paint.

Basket Landes relied on speed and fast breaks to stay in the game (18-19).

Lyon took control for good at the start of the second quarter keeping Basket Landes scoreless for almost five minutes while opening up a 7-point lead (25-18).

Basket Landes managed just 8 points in the second quarter of which 6 came for the charity stripes.

Lyon went into the interval leading (34-26) with the duo Mistie Mims (16 points) and Emilija Podrug (12 points) leading the way with 8 points each. 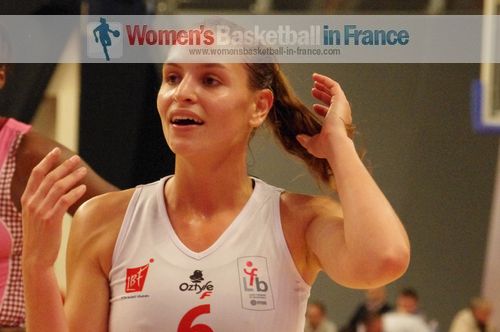 Then the game became stale during the third quarter as defense became the order of the day.

Mims went to work inside the paint scoring 8 of Lyon's 12 third-quarter points as they stretched their advantage (46-35) going into the final quarter.

While Mims did not score again it was the turn of Alexia Plagnard (in picture) who went on a scoring spree with 11 points in the last five minutes of the game. For Basket Landes Carmen Guzman was the only player really having any luck offensively with 22 points.

With Peperginan Basket losing in the LFB round 20 in the Saturday night game, Lyon are now just one game behind the third placed team.

Mims, Plagnard and Podrug were an impressive 19-from-27 from the floor (70% success rate).