Lattes Montpellier's perfect season in the LFB continues as they remain on top of the regular season standings after six rounds of game.

They cruised past Charleville-Mézières(63-46) and remain one game clear of Nantes-Rezé who suffered in holding off USO Mondeville (60-58).

In the other games played on Sunday, Arras won the North derby against Hainaut Basket (57-52) while Toulouse won on the road in the Pyrenees derby against Tarbes (72-65).

Toulouse had a good day from beyond the arc with 7-from-13 shots hitting the target. Julie Legoupil who is the team's specialist in this exercise hit 3-from-7 and finished the game with 11 points.

However it was the even scoring of Agathe Degorces (16 points), Carrem Gay (18 points) and Adrijana Knezevic (16 points) that saw Toulouse through.

Angelica Robinson was on fine form for Tarbes with 21 points and 16 rebounds. But with her team turning the ball over 15 times and another technical foul for their coach, a win was not to be. 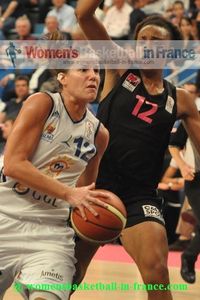 Since the start of the 2012-13 LFB season Lattes Montpellier win and their captain Gaëlle Skrela (in picture) fills the statistic sheet (this time with 14 points, 7 rebounds, 4 assists and 4 steals). Her 14 points came from a perfect shooting day from the floor and charity stripe.

The contest was over by half time with Montpellier leading (35-17). Charleville-Mézières made a little comeback during the second half. But once Aurélie Bonnan left the game to recover after being hit in the face, her side lost its momentum. 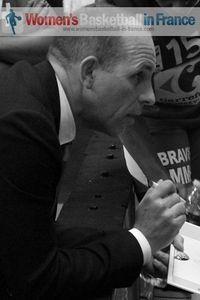 Nantes-Rezé once again gave their coach a hard time as they blew away a 16-point final-quarter lead against USO Mondeville before taking the match (60-58).

Throughout the game te officiating was not consistent which annoyed Hervé Coudray (in picture), the coach from Mondeville at the end of the game.

Nantes-Rezé controlled the first 30 minutes of the match before falling apart in the final quarter. Sarah Michel had a good game with 12 points and 5 assists while Isis Arrondo helped herself to 3 offensive rebounds in her total of 8 while also scoring 7 points and handing out 3 assists.

USO Mondeville once again could not get it going on the road despite the excellent performance by Ingrid Tanqueray (17 points).

Arras led for practically the whole game against Hainaut Basket to notch up their second win of the season (57-52). Johanne Gomis-Halilovic from Arras led all scoring with 16 points.

In the other games from round 6 that were played earlier in the weekend, Lyon BF beat Bourges Basket for the first time in the LFB while Perpignan held off Aix-en-Provence.

Basket Landes walked over Villeneuve d'Ascq in the opening game of the round.