Villeneuve d'Ascq continue to
struggle in the LFB


Once again Villeneuve d'Ascq lose a LFB basketball match on Friday evening in their own hall.

The victors Basket Landes were expected to struggle because they have had no time to rest after their EuroCup game 48 hours earlier. However it was the hosts that looked sluggish and ended up losing (50-70).

Villeneuve d'Ascq are still without Émilie Duvivier , Sandra Pirsic and the talented Emma Meesseman but on paper they still have a solid rotation. Villeneuve have been brilliant for short burst but this has not been enough.

With one victory from six LFB games the time has come for the club to pick themselves up.

Bintou Dieme (11 points) has been a workhouse for the team all season and she did her best to lift her team-mates.

Although their captain Olayinka Sanni had 17 points she still had troubles with her foul count. 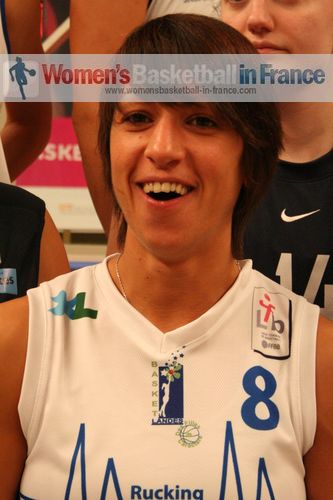 Basket Landes took more risks during the first ten minutes to unsettle their hosts despite playing at a low gear. However Villeneuve managed to draw enough fouls for free trips to the charity stripe with the teams finishing tied (16-16) at the end of the first quarter.

An 8-0 run by Basket Landes at the start of the second quarter finally raised the tempo. Villeneuve fought back with a perfect display of finishing by Sanni to trail by just 2 points at the interval (30-32).

10 third-quarter points by Anaïs Le Gluher-Cano (in picture) and Valériane Ayayi were all it took for Basket Landes to regain control of the game for good (57-43).

The contest fizzled out during the final quarter with Basket Landes taking the victory (70-50). Gluher-Cano finished the match with 18 points while Ayayi and Jennifer Humphrey had 15 points each.