LFB basketball
is exciting in round 2 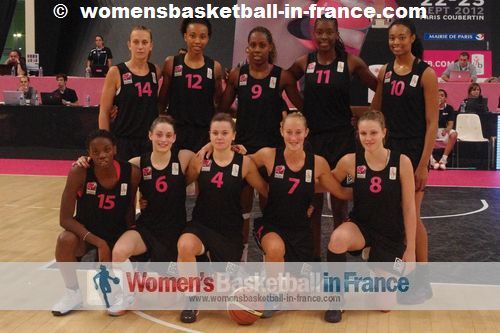 If the results of the second round of LFB basketball games are used as a reference for the rest of the season then this championship is going to be spectacular.

Toulouse trailed at home for most of the match against USO Mondeville and yet beat them (61-58).

While in the French press the victory of Toulouse is headline news, this success does not really come as a surprise.

Matthieu Chauvet, the coach from Toulouse was so disappointed after their defeat at the Open LFB, in a match he was convinced his team could have won that he was already focusing on the match against USO Mondeville. 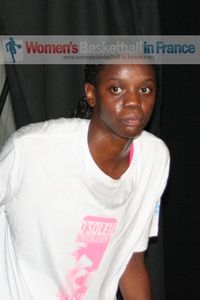 K. B. Sharp from Mondeville also hinted that last week that there were no surprises in LFB basketball and that everybody just had to take it one match at a time.

For Mondeville their bad habits from last season (2011-2012) on the road once again let them down as they allowed a third-quarter double digit lead evaporate with five minutes left to play.

Toulouse shot the ball better when it mattered at the end to sneak the victory. Lorraine Lokoka (in picture) from Toulouse was the game leading scorer with 15 points.

This is the first time in LFB basketball under the current system that both promoted teams had won a game by the second round.

This weekend two LFB basketball games were streamed live for viewers around the world.

In the first game Hainaut Basket, playing at home, improved on their performance from the Open LFB but still ended up losing.

Hainaut Basket led Perpignan (18-11) at the end of the first quarter but lost their way in the second quarter as their opponents turned things around with long distance shooting to lead at the break (30-24).

Perpignan cruised the rest of the way for the club's first ever victory in the LFB (62-47).

In the other streamed game Charleville-Mézières were easily beaten by Bourges Basket (49-60). The hosts failed to hit a shot from beyond the arc 0-from-6 while they also did not produce the flourish of last season when playing in front of the cameras of Ardennes TV.

Bourges Basket once again gave a demonstration on why they are the LFB basketball champions. Bourges were calm and cool but ruthless when required.

In the first quarter Emméline Ndongue came out with big blocks on Amel Bouderra and Ekaterina Dimitrova.

Neither player recovered from this treatment and did not attack the basket much more for the rest of the game. If not for Djéné Diawara's efforts inside the paint the hosts would have been blown away.

At the start of the final quarter Bourges Basket went 3-of-3 from beyond the arc with three different players scoring to bring the contest to an end (56-37) with eight minutes to play.

Last week Gaëlle Skrela (in picture) was amongst our list for the best players at the Open LFB after her performance in beating Toulouse.

This weekend she earned the first ever wbbif player of the month accolade after her masterly display against Tarbes.

She went 10-of-11 from from the floor, a perfect 3-of-3 from the free-throw line for her total of 24 points. She also dished out 4 assists and picked up 1 steal as Lattes Montpellier won on the road (75-56). Géraldine Robert was also on form with 18 points.

Nantes-Rezé made it two wins from two games by knocking off Villeneuve d'Ascq (84-74).

Viktoria Mircheva and Marielle Amant fired in 20 points apiece for the winners. Bintou Dieme led Villeneuve with 23 points while their captain Olayinka Sanni scored 16 points before fouling out.

It is never easy to win a match in Arras but Basket Landes managed it (53-43) with 15 points coming from Sabrina Reghaïssia.

So after two rounds of LFB basketball, the three teams from the North of France, Arras, Villeneuve d'Ascq and Hainaut Basket have been winless.